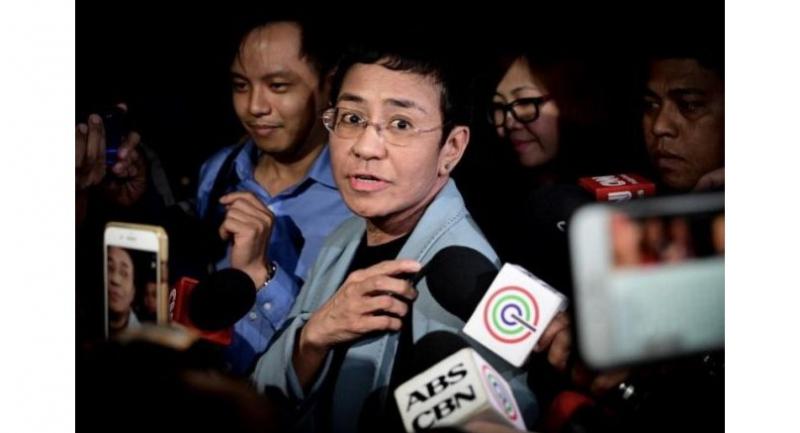 Maria Ressa speaking to media following her arrest inside the National Bureau of Investigation office in Manila on Feb 13.//EPA-EFE

The Asia News Network (ANN) said on Thursday it has taken note of the arrest of Maria Ressa, the executive editor and CEO of leading Philippine news site Rappler, with "concern and alarm".

"As Asia's leading alliance of 23 news media, we urge President Rodrigo Duterte and his government to be fair and impartial in the treatment of media organisations in his country. The people of the Philippines, and the media that serves them, deserve no less," the ANN said in a statement issued on Thursday evening.

The ANN said that Ressa's arrest for pursuing the truth in a case with significant ramifications for society was a violation of the freedom that media organisations need to have in order to function as a key pillar of democracy.

"This is particularly important in Asia, where systems of democratic representation, accountability and legal recourse are at various stages of nascent development, with much room for improvement and need for safeguarding," the ANN statement said.

The alliance - in which The Straits Times is a member - said it was "seriously disturbed" by the manner of Ressa's arrest and urged the Philippine government to refrain from intimidation of the media in any form.

The ANN said it had noted that the arrest warrant for Ressa's arrest was served close to 5pm on Tuesday (Feb 13), when courts were about to close.

It also took note that the warrant was based on a complaint filed by a businessman five years ago over a story published on Rappler's website in 2012.

The complaint had been dismissed by the Phililppines' National Bureau of Investigation in February 2018, which had found that the one-year prescriptive period had lapsed and there was no basis to proceed. The same case was revived eight days later, which led to Ressa's arrest.

Rappler's story had linked the businessman to murder, human trafficking and drug trafficking. While the ANN acknowledged that the allegations had been contested by the businessman's lawyers, Ressa's arrest without any attempt to determine the truth left the alliance disturbed over the conditions under which journalists had to operate in the Philippines.

"That the arrest follows charges of tax evasion against Rappler, which are still being investigated, is reason for further anguish. It inevitably raises serious questions about whether the charges are politically motivated," the ANN said in its statement.