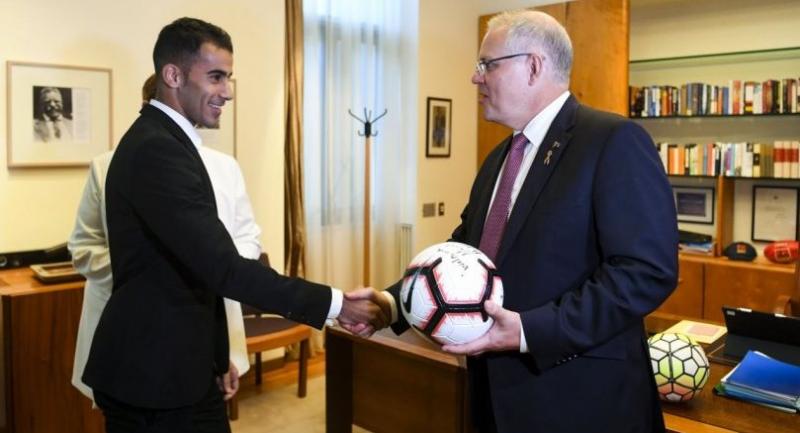 AMNESTY International Australia has called for the Australian government to conduct an independent investigation into what it called “a monumental mistake” that led to the much-publicised arrest and detention of a former Bahrain national footballer in Thailand.

The group’s call was in response to comments from Australian Border Force (ABF) commissioner Michael Outram on Monday that “human error” in his forces had led to Hakeem al-Araibi, a refugee with Australian residency, being detained for more than two months in a Thai jail and facing the threat of extradition to his native country.

“It is absolutely unacceptable that Hakeem, a completely innocent man supposedly under the Australian government’s care, was detained for 76 days in Thailand in fear for his life simply because someone at Border Force forgot to send an email,” Amnesty International Australia’s Tim O’Connor said.

The Australian government must conduct an independent investigation into this “monumental mistake” that caused a young man and his family months of heartache and could have cost them much more had he been sent back to Bahrain, he said.

The government must ensure that no other refugee is ever put in this situation again, O’Connor said. The results of any investigation must be made public immediately, and systems put in place to ensure no other person would suffer as Hakeem and his family did, he added.

“Human error must never again result in someone’s life being endangered,” he said.

Thailand faced blame and severe criticism over the arrest of al-Araibi on November 27 at Suvarnabhumi Airport, when he and his wife arrived here on a honeymoon trip.

Thailand effected the arrest on a request from Bahrain, which was alerted about al-Araibi’s trip through an Interpol red notice posted by Australia. Bahrain then sought his extradition over charges he faced in his country, which led to an extradition trial and resulted in him being detained in jail until this month.

The Australian government was at the forefront of repeated calls for the Thai government to release al-Araibi although the case was being heard by a Thai court. Australian Prime Minister Scott Morrison stepped up pressure by twice writing to his Thai counterpart, Prime Minister Prayut Chan-o-cha, to free the Bahraini.

Australia’s sporting organisations protested the arrest and one of them cancelled a friendly football match scheduled to be held in Thailand. Amnesty International Australia also condemned Bangkok, demanding that the 25-year-old Bahraini be freed immediately.

Thai Foreign Minister Don Pramudwinai insisted that it was an Australian Interpol alert that had led to Bahrain requesting al-Araibai’s extradition. Morrison denied the information.

Al-Araibi was eventually released on February 11 and returned to Australia after Bahrain dropped its extradition request following a visit to the Gulf country by Don to discuss the issue.

According to Australian media, ABF commissioner Outram said his officer failed to send a notification to Australian Federal Police (AFP) and the Department of Home Affairs, which would have alerted them to the fact that al-Araibi was on a protection visa in Australia.

That fact, once revealed to the AFP the day after al-Araibi was arrested in Thailand, prompted Interpol to withdraw the “red notice” issued at the request of Bahrain. Had it been known to the AFP beforehand, the AFP-based Interpol team would not have issued the notice.

The email notification is a manual, not automatic, process, Outram told a Senate inquiry on Monday night that “having reviewed the circumstances surrounding al-Araibi, it is clear that human error occurred within the [border force] process”.

Outram conceded that the mistake made by the border force had directly resulted in the AFP informing Thai authorities that a red notice existed for al-Araibi. “The officer in this case forgot to send an email. It’s as simple as that,” he said. However, he declined to apologise to al-Araibi, saying his detention could have occurred by some other means too, such as direct contact between Bahrain and Thailand.