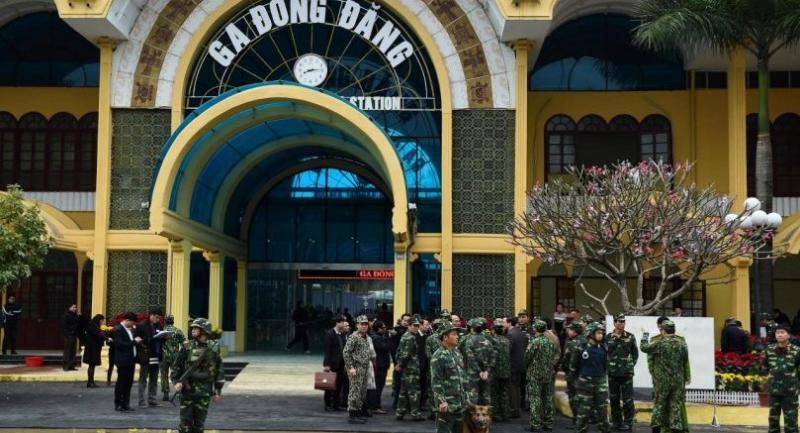 Vietnamese soldiers stand guard near an entrace of the Dong Dang railway station, where North Korean leader Kim Jong Un is expected to arrive by train ahead of the second US-North Korea summit, in Lang Son on February 25.//AFP

Hanoi - North Korean leader Kim Jong Un will be aided, guarded and advised by his most trusted team in Hanoi this week for his much-anticipated second summit with US President Donald Trump.

Some of them are already in the Vietnamese capital preparing for his expected arrival early Tuesday, while others joined Kim on his epic train journey across China in his special armoured train.

Who are the cast of characters joining the North Korean leader and what role will they play in Hanoi? AFP takes a look.

Kim Yong Chol, a senior North Korean party official and the counterpart to US Secretary of State Mike Pompeo, has been on the frontlines of the ongoing diplomacy between Pyongyang and Washington.

He is seen as Kim's most trusted aide and is accompanying him on his olive green train en route to Vietnam.

Kim flew to Washington with a letter for Trump from the North Korean leader last month, after which the White House announced the second summit to break months of deadlock since the first meeting in Singapore last June.

He was in charge of overseeing negotiations in Singapore -- the first-ever summit between the leaders of the US and North Korea -- and likely remains a key player in Hanoi.

Kim Yo Jong has been at her brother's side since his debut on the international stage for a visit to Beijing last year and is once again travelling with him to Hanoi.

She has been on hand at all times -- taking her brother's coat, studiously writing down his remarks, and handing him a pen for signing joint statements with leaders of China, South Korea and the US.

She grabbed headlines at the Pyeongchang Olympics last year as the public face of the North Korean delegation sent to the Games.

But she's also earned a reputation of unknowingly putting herself before the camera, straying into the shots of her brother and heads of states on several occasions before scurrying out of the picture.

Kim Hyok Chol arrived in Hanoi one week ahead of the summit for preparatory talks with his US counterpart Stephen Biegun.

A former North Korean ambassador to Spain -- before he was expelled amid soaring nuclear tensions in 2017 -- Kim was introduced as Biegun's counterpart last month when he visited the White House with Kim Yong Chol.

Kim and Biegun have engaged in marathon negotiations and are expected to wrangle over the agenda of the summit -- likely to include the terms of "denuclearisation" -- until the actual day of the summit.

Kim Chang Son is the de facto chief of staff to the North Korean leader, overseeing the security and protocol of key events attended by Kim Jong Un.

Both the North Korean leader and his sister are reportedly very fond of Kim, who has served as the "trusted butler" to the Kim family under Kim Jong Il -- the late father and predecessor to Kim Jong Un.

Kim Chang Son arrived in Hanoi nearly two weeks ahead of the February 27-28 meeting, closely touring and inspecting prospective sites for the summit and the accommodation of the North Korean leadership.

Around 100 North Korean bodyguards flew in from Pyongyang on Sunday as their leader was passing through China towards Hanoi, according to Vietnamese press.

The army of security officials remained at arms' length from Kim at his landmark meeting with Trump -- from the talks venues to when he roamed the streets of Singapore in a surprise night out on the eve of the summit.

The men -- dressed in matching sharp black suits -- earned the nickname of "human shield" at Kim's first summit with the South's President Moon Jae-in, when a dozen of them trotted along next to his Mercedes-Benz.