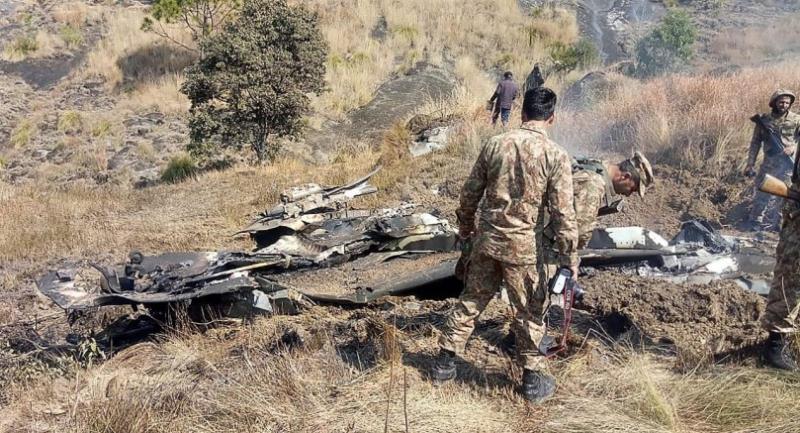 Pakistani soldiers stand next to what Pakistan says is the wreckage of an Indian fighter jet shot down in Pakistan controled Kashmir at Somani area in Bhimbar district near the Line of Control on February 27.//AFP

Chakothi, Pakistan - Thousands of Kashmiris have fled their homes, some bailed water out of disused bunkers, while others dug in -- determined to see out the latest flare up of hostilities between India and Pakistan.

Shelling across the heavily militarised Line of Control which divides Kashmir between the two South Asian countries sent many seeking shelter Wednesday, even before India and Pakistan both claimed they had shot each other's warplanes down, igniting fears of an all-out conflict.

Pakistani officials said four people were killed on Tuesday by shelling from the Indian side of the ceasefire line.

The death toll mounts on both sides each time sabre-rattling between India and Pakistan turns into conflict. This time, Kashmiris have watched warplanes fighting overhead and cowered under the shelling.

At least 2,000 people left their homes near the unofficial border in the Kotli and Jhelum Valley districts on the Pakistani side, and authorities closed all public schools, said officials. Other districts also saw an exodus.

"More people are leaving their homes and moving to safer places," said Umar Azam, a senior government official in Kotli. Internet was also cut in some zones near the frontier -- often a sign of military activity.

Women, men and children, loaded with cases and bags, could be seen on roads. Some pulled cattle or carried other animals.

Habib Ullah Awan, a 46-year-old grocery store owner in the nearby border village of Chakothi said shells were still falling when he left his home with eight members of his family early Wednesday.

"My house was not safe because of the shelling, God forbid, nothing will be left if a shell hits my house," he told AFP.

Most people leaving Chakothi went to Muzaffarabad, the main city in Pakistani Kashmir, or to stay with relatives in other villages. Those with no family to house them went to the Hattian Bala camp set up by the local administration.

Mushtaq Ahmed said he was taking his wife and children to Muzaffarabad. "But I will come back, I can't afford to leave my home and belongings unguarded," he told AFP.

At Kamalkote, on the Indian side, residents said they had also faced heavy shelling.

"We spent the night in total horror. Shells did not land in the village, but fighter jets are still flying above us," said a man who gave his name as Tariq.

There was also heavy shelling at Poonch further south on the Line of Control.

While no casualties were reported there, authorities have told villagers to prepare bunkers.

Some, fearing hostilities, took buckets underground to bail out complexes near the main city of Jammu that had been left flooded by melted winter snow.

Some residents have also left villages. "It happens regularly," said one at Poonch who declined to be named.

"My relatives know my family will be arriving."

Baseer Khan, a senior government official in Indian-administered Kashmir, said authorities are always prepared to evacuate border residents but no order to do so has yet been given.