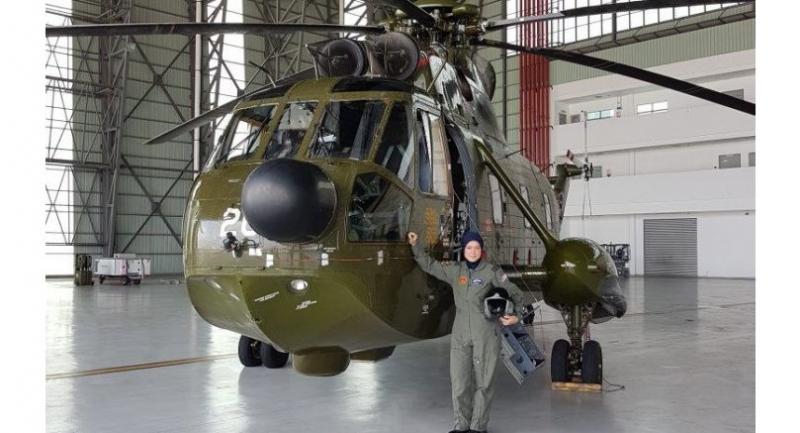 Lt Kol Norhana Abd Manaf grew up around helicopters, so being the country’s first woman helicopter pilot is especially significant for her.

Near her family home in Hulu Langat, Selangor, was the Higher National Youth Skills Institute where she could see helicopter pilots undergoing their training. She remembers vividly the sound of rotor blades roaring in the sky as the pilots took off and landed.

“My siblings and I would wave at the helicopter from afar. As the helicopter landed, we would run to the field to experience the powerful downwash (wind). I’ve always been in awe of helicopters, from when I was in kindergarten,” says Lt Kol Norhana, whose father worked with the British Army in Singapore.

She was the only one among her 15 siblings who joined the armed forces.

Lt Kol Norhana says it is important for women to work towards attaining their dreams.

“Initially, my father wasn’t too supportive of me joining the army. So I did my diploma in Secretarial Science from UiTM. But after that, Abah finally gave me his blessing and I applied to join the Air Force,” says Lt Kol Norhana, 45, who started her training at the Flying Training Center One, RMAF College in Alor Setar in 1995.

Besides flight training, Lt Kol Norhana also underwent basic military, parachute and survival training. She was offered a chance to become a jet fighter pilot but turned down the offer.

“I remember my father telling me not to fly too high or fast. So, I chose to fly the helicopter.”

It didn’t take her too long to realise that flying a helicopter was a totally new ball game.

She learnt news skills such as hovering a helicopter and making contingency plans and memorised the many functions of flight controls.

In the past, most female military staff didn’t hold jobs perceived as dangerous. Instead of serving as combat soldiers or fighter pilots, they functioned as support staff.

But times have changed and women are now given equal opportunity to take on the same responsibilities as men, and also vie for leadership roles.

Lt Kol Norhana earned her wings as a helicopter pilot in 1997. Today, our Air Force has 40 female pilots (including seven helicopter pilots). Many of these women are based at RMAF’s flight training college in Kepala Batas and operational squadrons across the country.

“Women are capable of protecting the nation, just like men. There is an increasing number of female military officers who are breaking the glass ceiling in their respective departments,” says Lt Kol Norhana, who has 1,800 flying hours under her belt as a Nuri and Aerospatiale Alouette III chopper pilot, and has served as an airforce operational pilot/instructor for close to 25 years.

Since 2012, she has been stationed at RMAF’s tactical, operations and strategic team at the Defence Ministry in KL.

The journey as a helicopter pilot has had its fair share of turbulences but Lt Kol Norhana has managed to steer her chopper through each rough ride.

Traditionally, the aviation field is always perceived as a testosterone-dominated industry. Till 1997, RMAF pilots have been entirely men and naturally, it took a while for them to adjust to having to share the cockpit with a woman.

“I’ve had a fair share of hurdles. When I became a wing commander, some of my male colleagues wouldn’t listen to my instructions. During my briefing sessions, a number of them would ask difficult question and challenge my aviation knowledge. There were also negative comments when I was pregnant with my first child,” says the mother of four children, aged between six and 19.

Instead of being disheartened, Lt Kol Norhana worked even harder to prove her mettle.

“To keep up to date, I continuously read aviation material and researched the Internet. Most of my male colleagues didn’t realise that by doubting my talents, they made me better in my job. In the long run, they had to work harder to pull up their socks,” said the soft-spoken woman.

In the course of her work, Lt Kol Norhana had had her share of hardships.

She was once stranded in the jungles of Pahang after her helicopter experienced a technical glitch during a medical aid services mission. Lt Kol Norhana and her crew ended up living among the orang asli community for several days.

“It was an unforgettable experience having to sleep in a bamboo house on stilts and surviving with bare necessities. I also got to see how to live, such as how they enjoy eating boiled tapioca dipped in cough syrup,” recalls Lt Kol Norhana.

Her saddest experience was participating in a search and rescue mission when her colleagues’ helicopter crashed in 2007.

It was Lt Kol Norhana who had spotted the crashed copter’s tail boom amidst the thick jungles of Genting Sempah.

“When I saw the broken tail boom, I knew the possibility to locate any survivors were very slim. It felt painful having to ferry a close colleague’s body back to base.”

Despite the challenges, Lt Kol Norhana is happy she pursued her ambition.

“I am living my dream of being a pilot. It’s really exhilarating being high up in the sky and soaking in the view from above. Live your dreams and always soar high to attain greater success,” recalls Lt Kol Norhana.