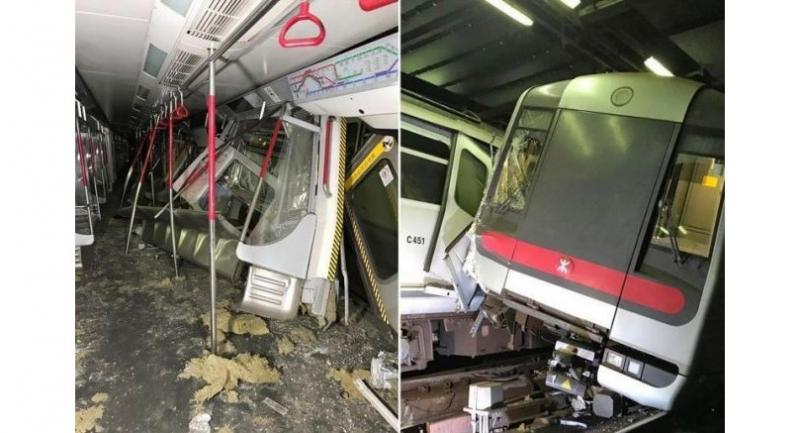 The collision of the two Mass Transit Railway trains happened at around 3am on the Tsuen Wan line when the train operator was testing a new signalling system. (Hong Kong MTR via The Straits Times/File)

The morning commute in Hong Kong was disrupted on Monday (March 18) after two subway trains collided in the wee hours during a trial run.

Two drivers were taken to hospital. One was injured in the leg while the other driver suffered from smoke inhalation, according to the police.

The collision of the two Mass Transit Railway (MTR) trains happened at around 3am on the Tsuen Wan line when the train operator was testing a new signalling system.

One train was seen tilted up on one side and detached from the track.

Services on the Central to Admiralty section of the line have been suspended for the day. Commuters have been told to use alternative methods of transport.

Trains on the rest of the Tsuen Wan line, between Admiralty and Tsuen Wan stations, are running at 3½ minute intervals as per normal, the MTR Corporation said.

Apologizing for the inconvenience caused, MTR's operations director Adi Lau said the operator had no clue why the two trains ended up on the same track during the trial.

He said all trials would be suspended until the cause of the crash is investigated, and vowed the new signal system would only come in after it passes all tests.

He added that it would take a day to resume train services because the undercarriage of one of the trains had derailed.

In a statement, the Hong Kong government said it "has great concern on the collision".  Secretary for Transport and Housing Frank Chan Fan has requested MTR Corp to conduct thorough investigation into the cause of incident, the statement said.

Mr Chan has also relayed to the Chairman of MTR Corp Board, Professor Frederick Ma, the request to call an urgent board meeting.

It added that the Transport Department is closely monitoring the traffic condition, and has requested and coordinated other public transport operators to enhance service.

This incident comes after the MTR suffered its worst-ever disruption caused by signalling failure last October.

Hundreds of thousands of commuters were inconvenienced on Oct 16 after four main lines on the train network were disrupted for six hours on Oct 16 due to a signalling glitch.