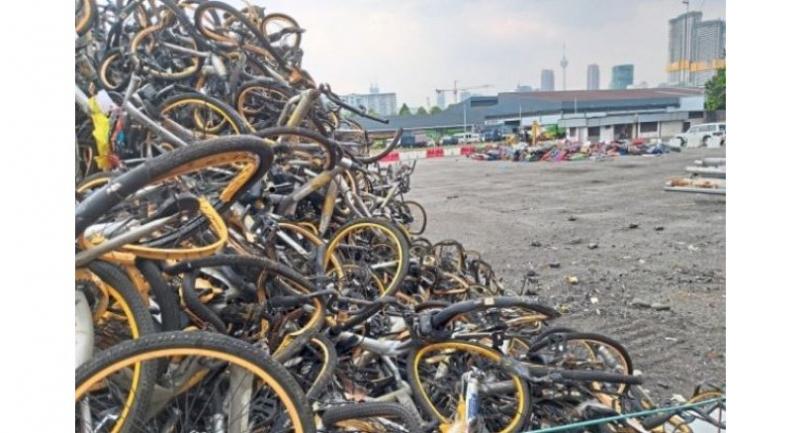 Some of the oBikes piled up at the DBKL depot in Cheras. — P. NATHAN/The Star

KUALA Lumpur City Hall (DBKL) is yet to hear from oBike Malaysia Sdn Bhd regarding its bicycles which are languishing in DBKL depots.

Mayor Datuk Nor Hisham Ahmad Dahlan said he has yet to receive any feedback from the Singapore-based company.

“No word from them,’’ he said when asked about the matter, adding the company has until April 15 to respond.

“We will go ahead and sell them as scrap if we do not hear from them before the deadline,’’ Nor Hisham said.

“It is something that is happening everywhere, not just DBKL. “Even in MBPJ (Petaling Jaya City Council) and MPSJ (Subang Jaya Municipal Council), I hear their depots are filled with oBikes,’’ he said.

When told about requests that DBKL donate the bicycles to poor children or educational institutions so they could be utilised, Nor Hisham replied it was not practical.

“The bicycles are all in bad shape, vandalised, broken and are missing many components. We will sell it (for scrap).”

StarMetro in its front-page story “Broken cycle of hope” on March 13 had reported that thousands of the yellow bicycles were piling up at DBKL depots.

DBKL enforcement officers had to collect the bicycles that had been left to rot around the city.

oBike is an on-demand and dock-less bicycle-sharing platform.

Users who downloaded the app could search and reserve a bike, and use a QR code to unlock it.

oBike was off to a flying start in Kuala Lumpur when the company partnered with DBKL to provide free rides during the 2017 SEA Games in August that year.

However, things fell apart soon after, and the problem of uncollected bicycles and complaints of obstruction started cropping up.

oBike was launched in February 2017 in Singapore. It ceased operation on June 25 last year and subsequently filed for insolvency.

The service had a presence in 24 countries, including Australia, Thailand, Taiwan and several European countries.

However, it ran into problems in many places due to fines imposed by the local authorities for having to collect the abandoned bicycles.