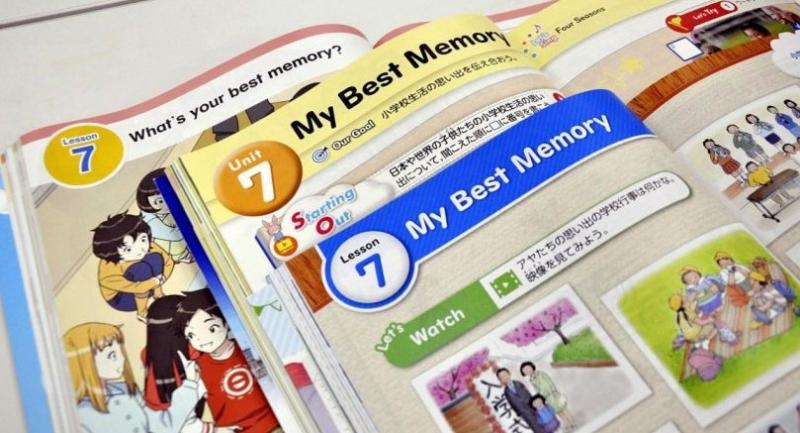 TOKYO - New textbooks for English, which will become an official subject in elementary schools from the 2020 school year, were unveiled this week when textbook screening results were released.

The English textbooks show how the publishers tried to address teachers’ anxieties about their ability to teach English, by creating texts that will be easy to use even for teachers with poor English skills.

Publishers also strived to make sure students do not develop a dislike of English.

English will be taught starting in fifth grade. The seven publishers that submitted textbooks had a total of 15 texts approved, in results announced Tuesday.

“We had nothing to base our work on, so we had to feel our way in creating a textbook that follows the curriculum guidelines,” the person in charge of the matter at Sanseido Co. said.

Kairyudo Publishing Co. had 18 current schoolteachers and administrators on the author team for its elementary school English textbook, representing about half of the total number on the team.

In contrast, there were only four or five teachers and administrators among the about 30 authors of its junior high and high school English textbooks.

The company wanted to emphasize ease of use in the classroom, so it took the unusual step of using active teachers and administrators for about half of the authors for the elementary school English textbook.

The current curriculum guidelines, which have been in force since the 2011 school year, introduced “foreign language activities” to accustom students to English through songs and games. Starting in fifth grade, students have 35 class periods per year (one per week for 45 minutes each) on these activities.

A fiscal 2014 survey by the Education, Culture, Sports, Science and Technology Ministry found that 92.6 percent of English teachers at public junior high schools felt that first-year junior high school students who had experienced these activities “had better attitudes about trying to communicate in English,” indicating the program had had some effect.

The curriculum guidelines that will be used starting in the 2020 school year move these activities up to third grade, with English becoming a graded subject in fifth grade with 70 periods per year.

The goal is to prepare students for a globalizing world by helping them acquire four basic skills — listening, speaking, reading and writing — at an early stage.

In fifth and sixth grade, the students will come into contact with about half the English words that are currently studied in junior high, or 600 to 700 words.

In China and South Korea, English education starts in the third grade, though not in all areas.

The area textbook publishers struggled with most was how to avoid making students dislike English.

“If teachers start to feel they can’t handle the job, children will come to dislike English. The joy children feel when they are able to speak English is incalculable. The content of the textbooks is simple and will make classes easy to conduct, so I hope teachers will use it to actively and repeatedly engage with students,” said Tamagawa Gakuen Prof. Emeritus Kumiko Sato, a specialist in English education.