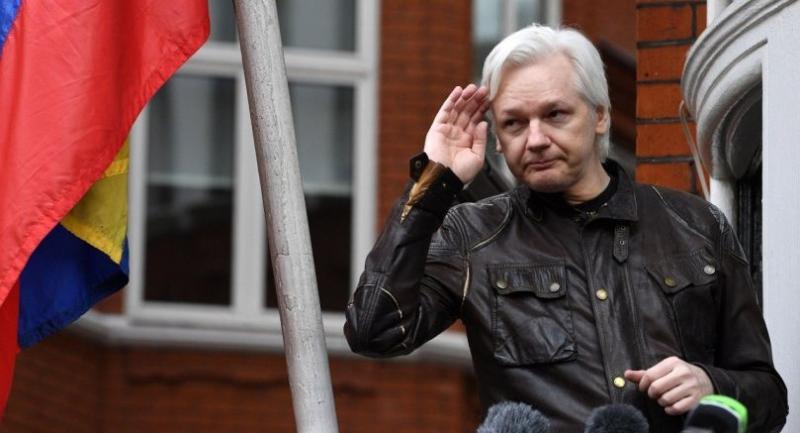 London - WikiLeaks founder Julian Assange's nearly seven-year stay at Ecuador's embassy in London came to an abrupt end on Thursday when police entered the building and arrested him after Ecuador withdrew his asylum.

Assange has been living at the embassy in London's plush Knightsbridge district since 2012 when he sought refuge there after being accused of sexual assault in Sweden -- allegations that have since been dropped.

Footage shot by Ruptly, a video news agency, showed a frantic-looking Assange, with a large white beard, being carried down the embassy steps by several men into a police van.

"I can confirm that Julian Assange is now in police custody and rightly facing justice in the UK," British Home Secretary Sajid Javid said on Twitter.

"No one is above the law," he wrote, thanking Ecuador for its "cooperation" in the long-running case.

WikiLeaks accused Ecuador of breaching international law by withdrawing his asylum and said the country's ambassador to London had "invited" police into the embassy building to carry out the arrest.

The 47-year-old Australian was due to appear in court later on Thursday. He faces prosecution for breaching the conditions of his bail in Britain in 2012.

He had refused to leave the embassy, fearing ultimate extradition to the United States where WikiLeaks said he faces charges over his website publishing huge caches of hacked State Department and Pentagon files.

WikiLeaks had warned last week that a revocation of Assange's asylum could happen within "hours to days", citing sources in Ecuador.

WikiLeaks on Wednesday had claimed that it was being blackmailed by "dubious characters" who had obtained security camera footage of Assange inside the embassy.

Kristinn Hrafnsson, editor-in-chief of WikiLeaks, accused Ecuador authorities of gathering the images, which he said then found their way into the hands of a group in Spain, who were demanding $3 million (2.7 million euros) not to publish them.

The documents include thousands of photographs and gigabytes of video footage showing Assange meeting with lawyers and visitors and of him receiving a medical check-up.

"Since (President Lenin) Moreno took power in Ecuador (in 2017), Julian Assange has been living in a Truman Show type situation" with constant surveillance, Hrafnsson claimed.

WikiLeaks believes that the United States is working with Ecuador to extradite Assange to face charges, and that the embassy documents were "quite likely shared with the Trump administration", although it offered no proof of this.

Ecuador had said on Tuesday it was reassessing Assange's asylum claim.