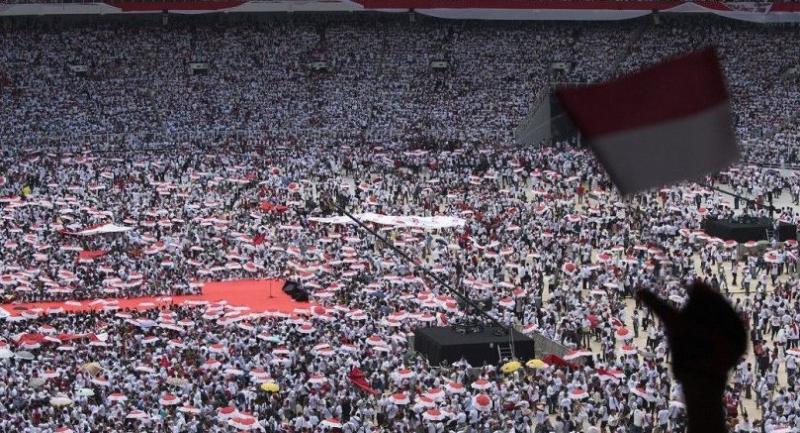 Thousands of supporters of President Joko "Jokowi" Widodo, including many volunteers, gather at Jakarta's Gelora Bung Karno Stadium on Saturday to attend the final rally in the incumbent's re-election campaign. (Antara/Widodo S. Jusuf)

President Joko “Jokowi” Widodo drew the curtain on his reelection campaign with a final rally at the Gelora Bung Karno Stadium (GBK) in Jakarta on Saturday, in the largest political event prior to voting next week.

Thousands of supporters, comprising members of the public, volunteers and members of political parties supporting the incumbent and his running mate, Ma’ruf Amin, gathered at the venue to express their support for the pair.

The event started with a carnival that set off from the National Monument (Monas) in Central Jakarta and included a concert featuring hundreds of singers supporting the Jokowi-Ma’ruf ticket at the GBK. It wraps up a seven-month campaign season that began in September.

“We want this open rally to be the biggest election campaign in Indonesia,” campaign team chairman Erick Thohir said on Saturday. “Hundreds of thousands of people will attend this event.”

Supporters wearing white clothes took their seats on the benches and many were standing on the racetrack and soccer field of the stadium, which—if filled to its maximum capacity—can accommodate 143,000 people.

The carnival started at 12 p.m. with a parade representing the country’s 34 provinces moving along a 7-kilometer route from the National Monument to the thoroughfares of Jl. Thamrin and Jl. Sudirman before finally reaching the GBK.

A traditional mask dance performance was held outside the stadium.

“Jokowi wants the electoral contest to be full of joy,” Erick said. “A political event should not be so gloomy, and this carnival is a celebration of democracy.”

According to a statement from the campaign team, 200,000 people had flocked to the GBK before the concert started at 2 p.m.

Slank guitarist Abdee Negara said the concert would bring together artists and performers from a diverse range of backgrounds.

“All of us will be united under the spirit of moving Indonesia forward,” he said.

Jokowi-Maruf campaign team secretary and Indonesian Democratic Party of Struggle (PDI-P) secretary-general Hasto Kristiyanto said officials of political parties in the coalition had chosen to gather outside of the GBK to leave more room for the public.

“The GBK is the people’s podium, and we want to prioritize members of the public and volunteers to attend the campaign inside,” Hasto said.

Jokowi was set to address his supporters from the center stage of the stadium in the afternoon, before he and Ma’ruf would depart for the fifth election debate for a final face-off with rival Prabowo Subianto and Sandiaga Uno. The debate was scheduled to be held at Hotel Sultan at 8 p.m. on Saturday.

Prabowo and Sandiaga had held their largest rally at the same stadium last week, albeit in arguably a different atmosphere, since the rival camp’s rally was marked with mass prayers, religious chanting and ubiquitous Islamic attire worn by the supporters.