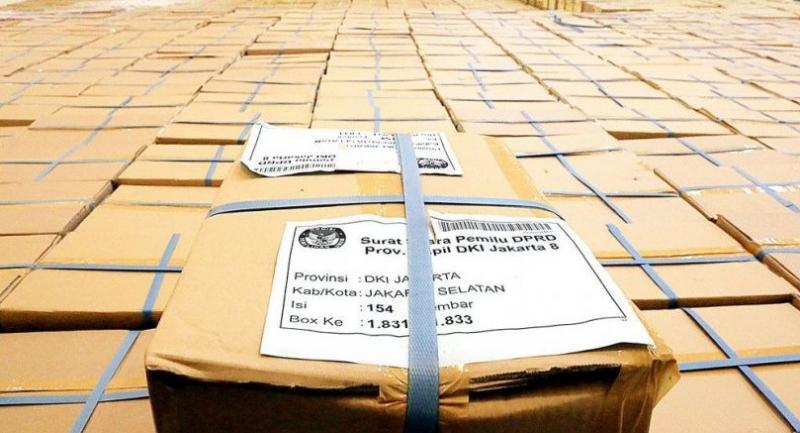 Packs of ballots are stacked in the Pancoran Youth Sports Hall, South Jakarta, on Feb. 15. (The Jakarta Post/Seto Wardhana)

The General Elections Commission (KPU) has been called on to investigate and make a decision on whether to carry out a revote, following reports of the discovery of marked ballots in several areas on Wednesday.

“The KPU at district or city level should resolve this. It’s possible to hold a revote if the Elections Supervisory Agency [Bawaslu] recommends it, but not all [the ballots] only those that were marked before voting,” Hasyim said on Wednesday.

Antara reported that 10 marked ballots for the presidential election were found by the Yogyakarta Bawaslu at polling station 41 in Tamantirto, Kasihan subdistrict, Bantul. The ballots were marked in favor of the Prabowo Subianto-Sandiaga Uno candidate pair.

A Yogyakarta Bawaslu official, Sutrisnowati, said the marked ballots were found by voters at the polling station

“We have been working with Bawaslu and the police. The ballots have been declared as damaged," he said as quoted by kompas.com on Wednesday.

However, Maryadi said he could not speculate if the marked ballots were intentional or not. "It's the police's authority to investigate the motive," he said.

On Wednesday, a video showing marked ballots that were discovered in Surabaya, East Java, went viral on Twitter. The video was uploaded by@ShahabHelda at 11.44 a.m.

The account owner said the incident took place at a polling station in Ampel district. However, an official of the Elections Supervisory Committee (Panwaslu) at the polling station said the ballots were not intentionally marked, but only damaged because the hole in the ballot box was too small.