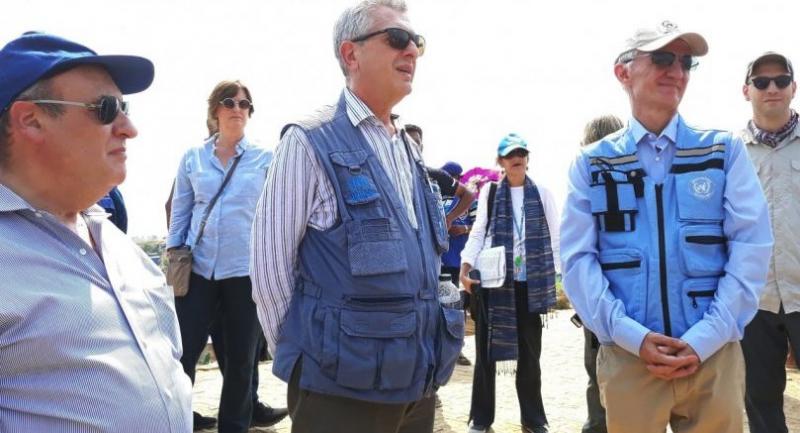 United Nations High Commissioner for Refugees (UNCHR) Filippo Grandi (C) look on next to other members of the delegation of United Nations organizations during their visit to a Rohingya camp in Ukhia, near Cox's Bazar in Bangladesh on April 26.//AFP

UN experts were only been able reach about 100 of the villages that the Rohingya fled after the Myanmar military launched a deadly crackdown in 2017, UN high commissioner for refugees Filippo Grandi said.

Even in those villages access has been "very restricted", Grandi told reporters at the end of a tour of refugee camps in Bangladesh's Cox's Bazar district, where more than one million Rohingya now live.

Riven by complex ethnic and religious divides, Rakhine is now witnessing deadly battles between the Myanmar army and the Arakan Army (AA), a group that claims to represent the state's ethnic Rakhine Buddhists and is vying for more autonomy.

The AA has killed at least 22 police officers since fighting ramped up in January.

The UN was to get access under an accord made with the Myanmar government last year to prepare for repatriations.

"The implementation of this agreement has been very slow, and has been particularly slow in the last three-four months" because of the Arakan army insurgency, Grandi told reporters.

Some 740,000 Rohingya refugees fled a military crackdown in August 2017 to cross into Bangladesh where 300,000 members of the persecuted Muslim minority were already in camps.

Many Rohingya refugees who fled Rakhine said there had been mass rapes and slaughters in the villages. UN officials have said the crackdown needs a genocide investigation.

UN leaders have called on the international community to step up financial support for the huge refugee concentration. Grandi said contributions this year had been lower than expected.

The envoys did not comment on Bangladesh's plans to move many refugees to an isolated island in the Bay of Bengal.