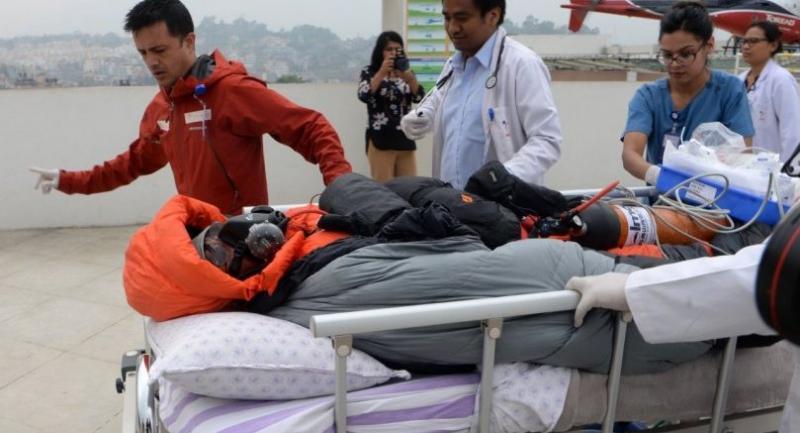 Medical staff and rescue team personnel move Malaysian climber Chin Wui Kin on a hospital bed after being airlifted to Mid-Citi hospital in Lalitpur, on the outskirts of Kathmandu on April 26.//AFP

Kathmandu - A Malaysian climber rescued after two nights in the open on one of the world's most treacherous mountains is fighting for his life in critical condition, his doctor said Friday.

Chin Wui Kin, 48, was airlifted to a hospital in Kathmandu for treatment in the morning after rescuers brought him down to a lower camp in a risky operation close to the summit of Mount Annapurna.

"His heart rate and temperature were both very low when we received him. He is suffering from severe hypothermia and has frostbite on his hands and feet," Sanij Singh, emergency physician at Mediciti Hospital, told AFP

"His condition is critical... we are doing what we can."

Chin, 48, reached the top of the 8,100-metre (26,500-foot) Himalayan mountain on Tuesday but failed to return to the nearest camp, one kilometre below the peak, with the rest of his group.

Frantic efforts began to find him after his guide stumbled to the camp and raised the alert.

A rescue helicopter spotted him waving from the snowy slopes at an elevation of around 7,500 metres (24,500 feet) early Thursday, Seven Summit Treks, his expedition organisers, said.

Four experienced Sherpas were then dropped at another camp at 6,500 metres (21,300 feet) and after four hours of searching and climbing found Chin in a semi-conscious state.

"It is amazing. We were very happy to find him alive... it was a tough and risky operation," said rescuer Nirmal Purja.

Purja said that the only words Chin spoke were "Can I have hot water?"

Climbing experts said it was a "miracle" that Chin survived the freezing conditions on Mount Annapurna for so long.

Hundreds of people from around the world travel to the Himalayas each year for the spring climbing season, when conditions are best.

Chin had returned to Nepal after summiting Everest last year.

Annapurna is avalanche-prone, technically difficult and has a higher death rate than Everest, the world's highest peak.

Nine South Korean climbers were killed last October after a snowstorm swept them off a cliff on Mount Gurja, west of Annapurna.