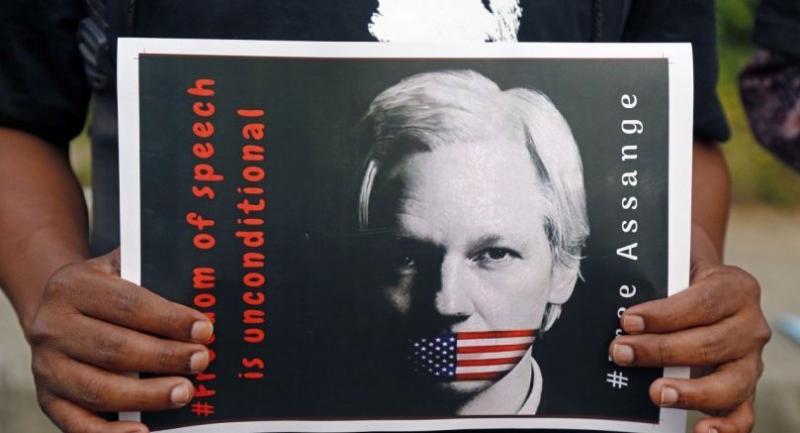 Members of 'Friends of WikiLeaks' form a human chain and hold a placards during a rally for the release of WikiLeaks founder Julian Assange in front of British Council Library at Fuller Road in Dhaka, Bangladesh, on April 23.//EPA-EFE

Madrid - Julian Assange's lawyers have filed a court complaint in Spain against a group of Spaniards they allege extorted the WikiLeaks founder and Ecuador's foreign ministry, a source in his defence team said Saturday.

Assange, who for seven years lived holed up in London's Ecuadoran embassy where he had taken refuge to avoid extradition to Sweden on rape accusations, was arrested on April 11 after Quito terminated his asylum.

The 47-year-old founder of WikiLeaks, which exposed everything from US military secrets to the wealthy's tax evasion, is now awaiting sentencing for breaching his British bail conditions in 2012.

The source, who wished to remain anonymous, said the complaint was against "a group of Spaniards who allegedly engaged in extortion and the embassy's employees and Ecuador's foreign ministry."

The source added an investigation was ongoing and alleged "espionage" in the embassy against Assange, refusing to give further details.

According to Spanish media reports, four Spaniards have videos and personal documents of Assange.

Online daily eldiario.es said they somehow got these via an alleged spying system set up in the embassy that included security cameras and employees taking photos of all documents handled by Assange.

They allegedly tried to extort three million euros ($3.3 million) out of WikiLeaks not to publish any of it, Spanish media report.

Eldiario.es, which had access to the written complaint that was filed to Spain's top-level National Court, says Assange's lawyers also accuse Ecuador of spying on him.

The National Court could not comment when contacted by AFP.

That contrasts with Ecuadoran President Lenin Moreno's version of events.

In an interview with the Guardian newspaper, he alleged Assange had tried to set up a "centre for spying" in Ecuador's embassy.

Last year, Quito cut his internet and mobile phone access, accusing him of breaking "a written commitment" not to interfere in its and allies' foreign policies.

The move infuriated Assange, who sued the government for violating his "fundamental rights" by limiting his access to the outside world.

Now in prison in Britain, Assange is also fighting a US extradition warrant relating to the release by WikiLeaks of a huge cache of official documents.