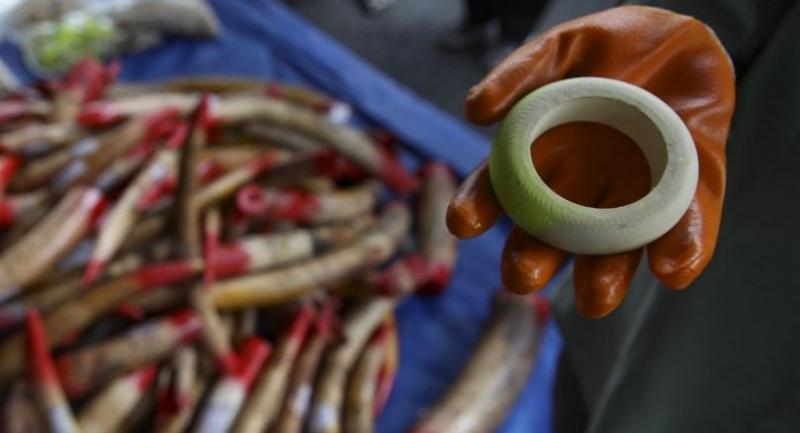 A Malaysian wildlife official displays a bracelet made with confiscated elephant ivory tusks before the destruction of the ivory, in Port Dickson, Negeri Sembilan, Malaysia, 30 April .//Photo : EPA-EFE

Port Dickson, Malaysia - Malaysian authorities incinerated almost four tonnes of elephant tusks and ivory products worth about $3.2 million on Tuesday, as they crack down on rampant wildlife-smuggling across the country's borders.

The small Southeast Asian nation has become a transit point in the illicit trade in ivory, which typically arrives from Africa and is sent on to major Asian markets such as China and Vietnam.

Officials torched 3.92 tonnes of tusks and ivory products seized at Malaysia's ports and airports between 2011 and 2017, said Xavier Jayakumar, the minister for water, land and natural resources.

The massive stash, destroyed in an incinerator, was worth an estimated 13.3 million ringgit ($3.2 million), he said.

The global trade in elephant ivory, with rare exceptions, has been outlawed since 1989 after populations of the African giants dropped from millions in the mid-20th century to around 600,000 by the end of the 1980s.

Ivory and other rare animal parts are prized for their use in traditional medicine in some Asian countries, despite the fact there is no scientific proof of their medical benefits.

The pangolin is the world's most heavily trafficked mammal.