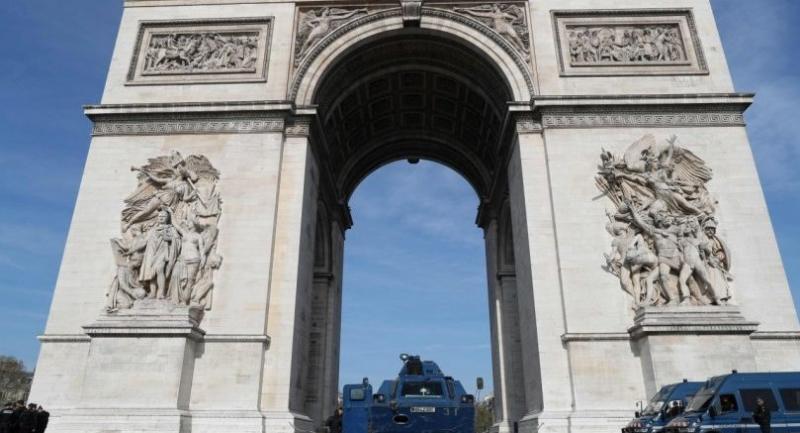 French gendarmes and armoured vehicles are in place at the Arc de Triomphe in Paris on April 6.//AFP

Paris - The Arc de Triomphe in Paris, which was ransacked during a "yellow vest" protest last year, will be entirely restored for next week's VE Day celebrations, the French government said Friday.

The monument, which contains the French tomb of the unknown soldier, was vandalised during an anti-government demonstration in December that ended in rioting and looting.

Culture Minister Franck Riester said 1.2 million euros ($1.3 million) was spent restoring damaged statues and equipment inside the landmark at the top of the Champs-Elysees.

As well as spraying its walls with graffiti and breaking equipment, rioters smashed artworks, including a 1930s copy of a famous sculpture of "The Marseillaise" by Francois Rude representing Victory, which was moulded from the 19th-century original.

"The restoration has been done in only a few months, which is very fast," said Riester, while praising the work.

He said everything would be ready Wednesday when VE Day celebrations mark the 74th anniversary of Nazi Germany's surrender to the Allies on May 8, 1945.

The monument, which was built by Napoleon to commemorate his many military victories, reopened less than a fortnight after rioters broke into it on December 1, though some areas remained cordoned off.

Each year, more than 1.5 tourists visit the Arc de Triomphe, mostly to take in the view down the Champs-Elysees.

Bulgarian-born artist Christo last month announced that he had received permission to wrap the world-famous landmark next April in the signature style he developed with his late French wife Jeanne-Claude.