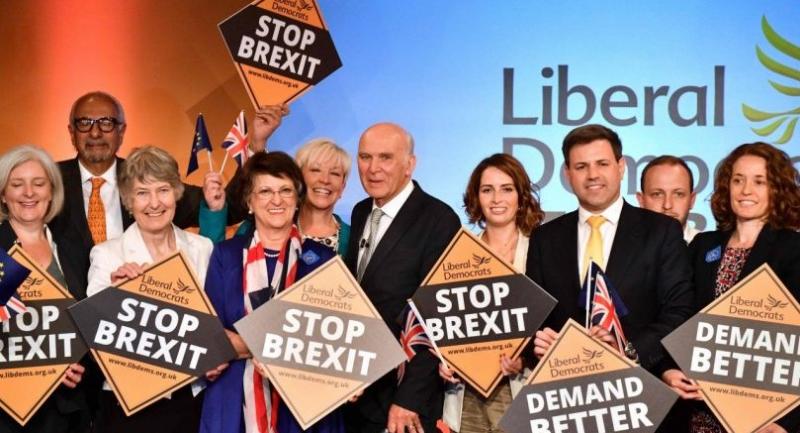 In this file photo taken on April 26, 2019 Liberal Democratic Party leader Vince Cable (C) poses with the party's MEP candidates for the European Parliament election during a launch event in London on April 26.//AFP

"There was a simple message from yesterday's elections to both us and the Labour Party: just get on and deliver Brexit," May said.

Britain's bitterly-divided MPs have been unable to agree on a divorce deal with the EU, with the two main parties in talks on breaking the impasse that have produced little fruit so far.

"This is a difficult time for our party and these election results are a symptom of that," May told the Welsh Conservative Conference, having faced down a heckler calling for her to quit.

The results do not bode well for the Conservatives and Labour ahead of the European Parliament elections, set to take place in Britain on May 23.

After voting in June 2016 to leave the European Union, Britain was meant to depart on March 29 this year. However, its exit date has been postponed until October 31 due to the wrangling.

With more than half the English councils having declared results Friday, the centrist Liberal Democrats and left-wing Greens -- both anti-Brexit -- made gains, along with independent candidates.

"Of course we wanted to do better," said Labour leader Jeremy Corbyn, adding that he was "very sorry" for the party's losses.

"Some of them were people probably disagreeing with both parties on attitudes towards the EU.

"We're the only party that seeks to appeal to people however they voted in 2016."

Voters went to the polls in mainly rural and suburban areas of England, with more than 8,000 seats up for grabs.

All 11 local authorities in Northern Ireland were also contested among the province's own parties.

"The key message from the voters to the Conservatives and Labour is: 'a plague on both of your houses'," polling expert John Curtice told the BBC.

They lost votes most heavily in the wards where they were strongest, he said. Voters typically give the sitting government a kicking at this mid-term point in the electoral cycle.

The ruling Tories are also mired in a scandal over the leaking of news that Huawei was to build parts of the country's 5G network, leading to the sacking of defence minister Gavin Williamson.

However, left-wing Labour also lost ground -- sweeping gains would point to an opposition party being on course for government.

The party's Brexit position is described by some commentators as constructive ambiguity.

Labour MP Owen Smith, who tried to oust leader Jeremy Corbyn in 2016, said the party's "Brexit fudge" was "melting under the public's gaze".

The party is also losing support over the issue of anti-Semitism, which flared again this week when it emerged leader Corbyn had written the foreword to a book containing what the party called "offensive references".

The council elections decide who sets local tax rates and runs community services but are often swayed by the national picture.

The Greens appear to have been boosted by the recent climate protests in London, which brought environmental issues to the front-pages.

Liberal Democrat leader Vince Cable said voters "no longer have confidence in the Conservatives, but they are also refusing to reward Labour while the party prevaricates on the big issue of the day."

The problems for the two main parties could worsen at the European elections when they will also face two newly-formed forces: the Brexit Party -- which leads in the opinion polls -- and pro-EU centrists Change UK.

The local election results could sharpen minds on resolving the Brexit impasse.

Conservative MP Bernard Jenkin told BBC radio that if the centre-right party "doesn't mend its ways pretty quickly, the Conservative Party is going to be toast."