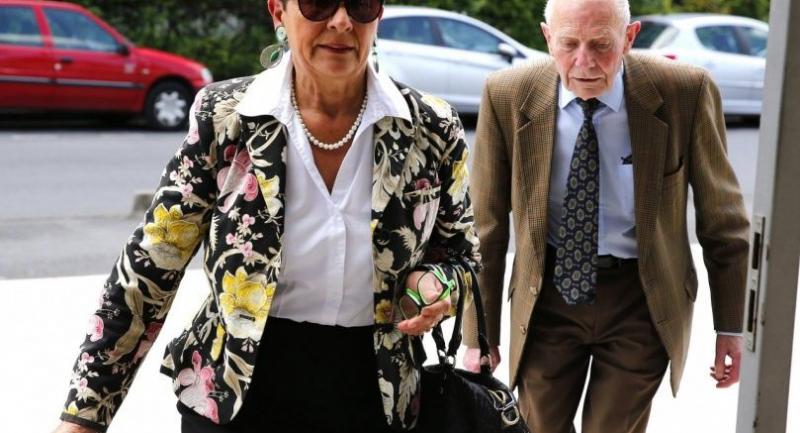 In this file photo taken on June 9, 2016 Viviane Lambert (L) and Pierre Lambert (R), the parents of French quadriplegic Vincent Lambert who is being kept artificially alive since 2008 after a car accident, arrive at the Appeal court in Reims.//AFP

Lille, France - A UN committee has asked France to suspend any decision to withdraw life support for a man kept alive in a vegetative state for a decade, weighing in on a bitterly-disputed legal case which has torn his family apart.

The move by the UN committee on disabled rights was the latest twist in a long-running legal drama that has ignited a heated debate in France on the right to die.

The case centres on the fate of Vincent Lambert who suffered severe brain damage after a car accident in 2008 which left him a quadriplegic. Since then, he has been kept alive through artificial nutrition and hydration at a hospital in Reims, northeastern France.

In 2014, the doctors, backed by Lambert's wife Rachel, five of his siblings and his nephew Francois decided to stop his nutrition and hydration in line with France's passive euthanasia law.

But his parents, deeply-devout Catholics, and his half-brother and sister obtained a court order to halt the move on grounds his condition might improve with better treatment.

Speaking to AFP late Saturday, Jerome Triomphe, a lawyer for Lambert's parents, said the UN committee had asked France to suspend a decision to halt the intravenous food and water keeping him alive while it conducts its own investigation.

"The application has been filed and this international committee has begun its investigation," he said, indicating it could take "several years".

With the inquiry under way, the committee had asked France to ensure that Lambert's care was continued, in line with the conventions on disabled rights, Triomphe said.

In response, Health Minister Agnes Buzyn said although France would answer the UN committee, it was not under any legal requirement to abide by its request.

"We are not legally bound by this committee, but of course we will take into account what the UN says, and we will respond," she told BFMTV on Sunday.

"All the legal appeals have been exhausted and all judicial bodies, both national and European, confirm that the medical team in charge of his case has the right to halt (Lambert's) care."

"This is a great accomplishment: finally, a specialised body will be able to consider the merits of the case," Triomphe said.

"Is it right for him to be in a palliative care service... or should he be in a specialised unit?"

Since the legal battle first began, the French courts have largely backed the doctors, upholding a decision earlier this year to withdraw life support for Lambert, a former psychiatric nurse who is now 42.

His parents then appealed to the Council of State, France's highest administrative court, and when it confirmed the decision late last month, they then turned to the European Court of Human Rights and the UN committee on disabled rights.

In a ruling issued on Tuesday, the European court rejected their appeal for a suspension, echoing a 2015 decision. But it was accepted by the UN committee, which has given France six months to present its observations on the case.

Gerard Chemla, lawyer for Lambert's nephew Francois, described the latest twist as "appalling", telling AFP the UN committee's intervention "in the name of human rights, would violate the rights of a man who has been suffering gratuitously for years".

Active euthanasia, by which a person deliberately causes a patient's death, is illegal in France despite recent efforts to ease legislation dealing with the terminally ill.