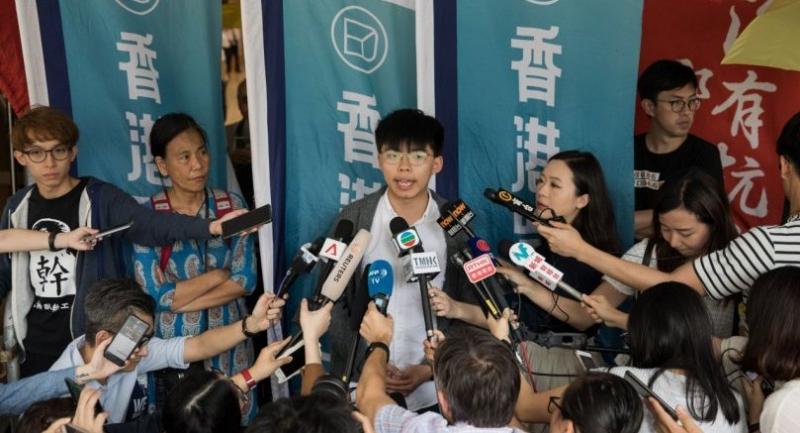 Prominent Hong Kong student leader Joshua Wong was sent back to prison Thursday after he lost an attempt to quash a jail sentence over his leadership of huge democracy protests five years ago.

Wong, 22, became one of the most recognisable faces of the "Umbrella Movement" in 2014 which paralysed key intersections of the financial hub for more than two months.

Protesters were demanding a greater say in how the city is run, including the right for Hong Kongers to directly elect the city's leader.

The movement -- which took its name from the umbrellas protesters used to defend themselves against police -- failed to win any concessions from the city's pro-Beijing authorities, and its leaders faced a slew of prosecutions.

Wong, who was 17 when the protests began, was jailed for three months in January 2018 on a contempt charge after pleading guilty to obstructing the clearance of a major protest camp.

He served only six days of that sentence before being released on bail pending an appeal.

On Thursday, however, a senior judge said Wong must return to jail -- albeit for a reduced sentence of two months.

Justice of Appeal Jeremy Poon said Wong's age at the time of the offence was a mitigating factor, as well as his guilty plea and apology.

But he dismissed Wong's argument that he had been excessively punished by authorities because of his prominent status as "entirely baseless and misconceived". Wong turned to supporters after the verdict and told them to "add oil" -- a commonly used Cantonese phrase of encouragement.

He was then led away to a prison van.

Speaking to reporters before the verdict, Wong said he was facing the prospect of jail "with a calm mind", noting that other leaders had received much longer sentences.

Last month two key leaders of the protests were jailed for 16 months.

"We will never forget the spirit of Umbrella Movement and we will continue to fight for free elections," he said.

Wong's jailing comes against a backdrop of roiling turmoil in Hong Kong over the government's plans to approve extraditions to the Chinese mainland for the first time.

The issue has sparked the largest protests in the city since the 2014 demonstrations and even sparked scuffles in the legislature.

Hong Kong's leadership has faced a chorus of criticism from business, legal figures and western governments who fear the law could tangle people up in China's opaque court system.

But the city's pro-Beijing leader Carrie Lam has vowed to press on.

In his comments Wong warned the proposed law might see activists pursued by the mainland, something the Hong Kong government has denied.

"Today the High Court, tomorrow the People's Court," he said, referring to the mainland's judicial system.

Wong was also convicted in a second prosecution related to the storming of a government forecourt during the 2014 protests.

He spent some time behind bars for that case, but in the end the city's top court ruled that community service was sufficient punishment.

While Hong Kong enjoys rights unseen on the Chinese mainland under a 50-year handover agreement between Britain and China, there are fears those liberties are being eroded as Beijing flexes its muscles and stamps down on dissent.

Authorities in Hong Kong and the mainland have defended the prosecutions as a necessary measure to punish the leaders of a direct action movement that took over the heart of the city for many weeks.