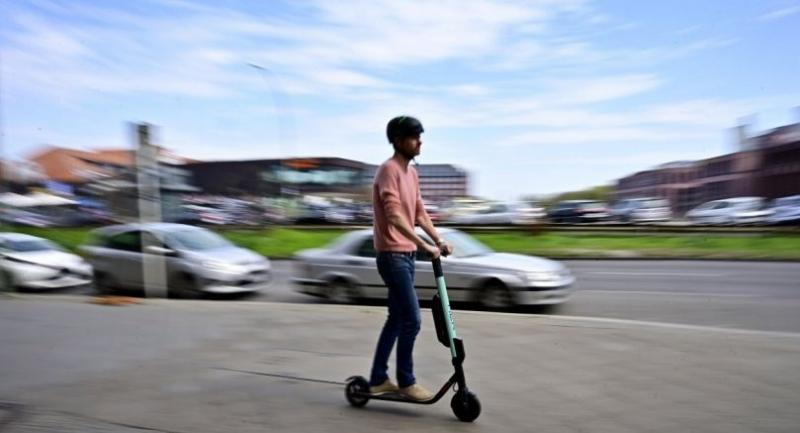 In this file photo taken on April 17, 2019 A man rides an E-Scooter of rental company Tier in Berlin on April 17.//AFP

Berlin - Germany on Friday authorised battery-powered scooters on its streets and cycle paths but banned them from pavements to protect pedestrians as the two-wheeled craze continues to spread across Europe.

Following fierce debate over road safety and the impact on traffic, the upper house adopted a proposal by Transport Minister Andreas Scheuer to approve the "electric propulsion vehicles" for road use.

They are either loved or loathed in Europe's biggest economy.

"In Germany, souls are divided over e-scooters. Rarely has a new technology aroused such strong popularity -- and such strong rejection", said Achim Berg, president of Germany's IT federation Bitkom.

Scheuer was forced to amend his initial suggestion to allow electric scooters on pavements, after it sparked an outcry from politicians, police unions and insurance groups.

Electrical scooters will only be allowed on pavements in exceptional cases, to be expressly indicated by signs.

E-scooter users must respect a speed limit of 20 kilometres (12.4 miles) per hour and be aged 14 years or older.

The decision opens up the market for mobility companies vying to provide rented e-scooters in Germany's cities with Berlin-based startup Tier and Sweden's Voi up against US firms Lime and Bird, leaders in the fast-growing sector.

Europe's leading economy, with its mostly flat, highly urbanised geography and spiderweb network of cycle paths is a potential goldmine for e-scoot rental providers waiting in the wings.

"You have to expect a greyhound race. Whoever can convince people first will win the market," said Hans Preissl, a spokesman for Frankfurt's traffic authority.

The economic model of the booming e-scooter market still needs refining however, warns a study by the Boston Consulting Group on Friday.

"If market growth were vehicle acceleration, the humble electric scooter - the latest answer to urban mobility - would be a Ferrari," said BCG, which predicts "consolidation is inevitable" in such a crowded market.

Undeterred, German car behemoth Volkswagen is eyeing the e-scooter market with plans to incorporate them into its own car-sharing scheme by the end of the year.

However, an influx of scooters could intensify the battle for space on Germany's streets, where cycling associations have long demanded more and wider bicycle paths.

"Conflicts are inevitable," Social Democrat politician Anke Rehlinger said Thursday, adding that "continuous" effort should be made to define new rules for the e-scooters.

Scheuer labelled them a "genuine additional alternative for cars" in Germany's traffic-choked cities yet there are also medical warnings against their use on Germany's roads.

"E-scooters are highly dangerous in city traffic - not least because other road users find it extremely difficult to adjust to them," Christopher Spering, from the German Society for Orthopaedics and Trauma Surgery, told the Neue Osnabrücker Zeitung newspaper.

There are also fears cyclists could be pushed off cycle paths specifically built for them.

Daily newspaper Maerkische Oderzeitung says German cities have a choice -- either they "risk chaos and even war between the modes of transport" or they prioritise cyclists, e-scooters users and pedestrians resulting in "painful losses for motorists" in inner city areas.