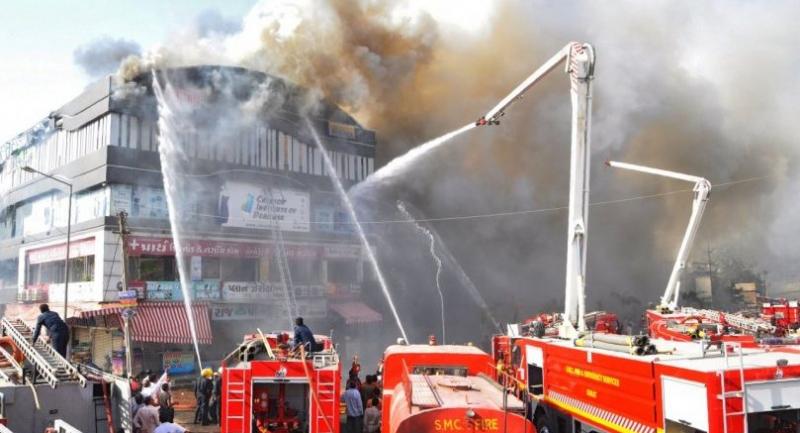 Indian firefighters try to control a major fire in a building housing a college, in Surat, some 270 kms. from Ahmedabad on May 24.//AFP

Ahmedabad, India - At least 15 students died Friday in a fire in a building in India housing a college, officials said, with images showing people jumping to escape the blaze.

"The students lost their life both because of the fire and jumping out of the building," Deepak Sapthaley, a fire official in the western city of Surat, told AFP.

Ten of them died from the jump and five from the fire, with up to 20 being treated in hospital, he said. The images showed blazing orange flames and black smoke billowing out of the building.

Sapthaley added that 50 or 60 people were inside the coaching institute on the top floor of the building when the blaze began. The cause was not yet known.

Prime Minister Narendra Modi, who comes from Gujarat state where the fire broke out, said on Twitter: "Extremely anguished by the fire tragedy in Surat.

"My thoughts are with bereaved families. May the injured recover quickly. Have asked the Gujarat Government and local authorities to provide all possible assistance to those affected."

Local officials said that the fire had spread quickly because of the material used in the roof.

The fire started Friday afternoon when the classes were packed, mostly with teenagers, and the officials were still trying to control the blaze.

Local media reports said that the toll could still rise further as many students were undergoing treatment at local hospitals.