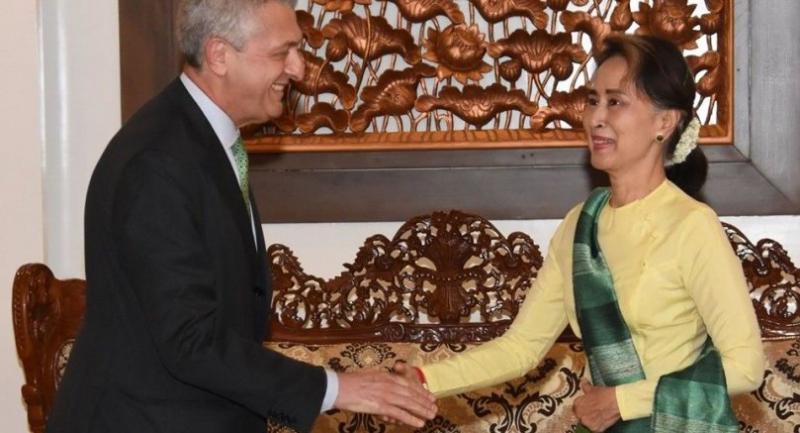 By Khine Kyaw
The Nation,
Yangon

While the international community continues to show concern over the government’s political will on the repatriation of Rohingyas, Myanmar recently took steps to boost ties with the United Nations High Commissioner for Refugees (UNHCR).

Dr.Ko Ko Naing, a director general at the Ministry of Social Welfare, Relief and Resettlement, told The Nation on Friday that the authorities recently had a “fruitful discussion” with Filippo Grandi, UN High Commissioner for Refugees, who was in the country for a five-day visit which began on Monday.

“We have been actively cooperating with UN agencies over the past few years, and UNHCR is one of them. (On Thursday) we discussed with Grandi further plans for collaboration,” he said.

Officials on Thursday signed a memorandum of understanding (MoU) on collaboration in disaster management and humanitarian works with Grandi. The agreement, signing in Nay Pyi Taw, will strengthen Myanmar’s ties with the UN refugee agency, allowing UNHCR’s assistance in the event of disasters.

“We will ensure to prioritise security and stability of the conflicted areas while undertaking humanitarian works in disaster-hit regions,” he said.

According to the agreement, UNHCR will have to notify the ministry of any challenges it is facing on the ground so both parties can work together to address them.

“This MoU means an additional three years cooperation with UNHCR. We hope to collaborate more in welcoming Myanmar migrant workers back home as well as providing humanitarian assistance to internally displaced persons (IDPs),” he said.

Prior to the signing, Grandi met with State Counsellor Aung San Suu Kyi on Thursday, and discussed the extension of the MoU signed between Myanmar, UNDP and UNHCR in June 2018, implementation of the community-based Quick Impact Projects (QIPs), the voluntary return of verified Myanmar nationals from the temporary camps along the Myanmar-Thailand border, and provision of assistance by UNHCR for ensuring peace and development in Myanmar.

In the first two days of his trip, Grandi visited communities in Rakhine State including Muslim refugees in Khaung Doke Khar camp in Sittwe, and the northern townships and met with regional authorities.

In Maungdaw township, in the northern part of Rakhine State, Grandi travelled to a number of villages to hear Rakhine, Rohingya and other communities tell of their challenges, needs and hopes. They also said that projects in their villages - such as water reservoirs, school rehabilitation, road improvements, provision of bicycles and skills training - are already making a difference in their lives.

While driving in northern Rakhine, Grandi saw stretches of empty land once occupied by Rohingya villages now covered by overgrown vegetation. Few signs remain of the houses and markets that once dotted the landscape, the statement said.

In Buthidaung, at a Buddhist monastery hosting Rakhine people recently displaced, representatives told Grandi of their wish to return to their homes as soon as possible. They asked for security to be reestablished, unexploded ordinances cleared and strongly appealed for peace.

The Rakhine State Government currently estimates that around 29,000 people, mostly from the Rakhine community, are displaced in seven townships in Rakhine state due to this conflict.

Grandi also met with a group of Rakhine villagers in Maungdaw township, once a cluster of five villages surrounded by farms and fish ponds, with a large Rohingya population who are now refugees in Bangladesh. They expressed concerns about the impact on the local economy and labour shortages following the departure of their Muslim neighbours.

As the first visit by the UN refugee chief to Myanmar since August 2017, Grandi’s trip comes on the heels of the High Commissioner’s mission to Rohingya refugee camps in Bangladesh at the end of April. More than 900,000 stateless Rohingya refugees currently live in crowded settlements in Cox’s Bazar, of whom an estimated 741,000 fled from Myanmar since August 2017, according to UNHCR.

“In the course of his stay in Myanmar, Grandi will follow up on a range of issues raised by refugees from Myanmar and will discuss Myanmar’s efforts to find comprehensive and durable solutions to the crisis in Rakhine State,” UNHCR said in a statement.

Prior to his visit to Myanmar, Grandi visited refugee camps in Bangladesh in late April. There, he stressed that key moves and progress must be made by Myanmar authorities.

“The Myanmar side must address the issue of Rohingya rights,” he said. “That includes freedom of movement, access to jobs and services, and a path to citizenship.”