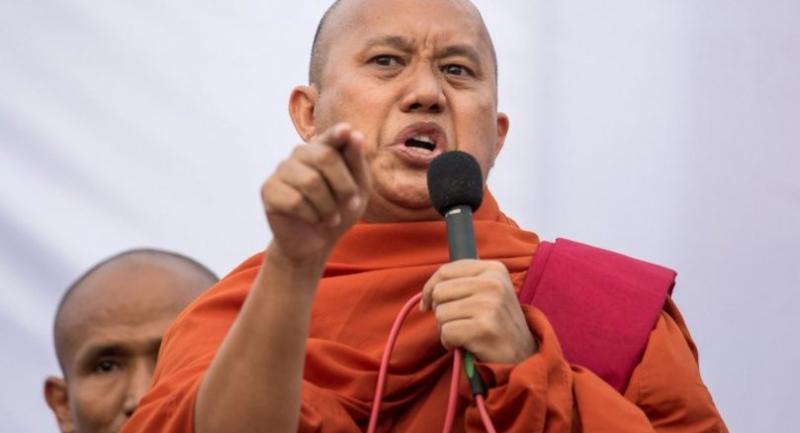 In this file photo taken on May 5, 2019, Buddhist monk Wirathu speaks during a rally to show support to the Myanmar military in Yangon.//AFP

Yangon - An ultra-nationalist monk dubbed the "Buddhist Bin Laden" for his anti-Muslim vitriol has been summoned for reprimand by Myanmar's top religious council, as police pursue him on charges of stirring up unrest.

Wirathu has long been the face of the country's hardline Buddhist movement, notorious for espousing hate against Islam and particularly the long-persecuted Rohingya minority.

A court issued an arrest warrant for the abbot late Tuesday under article 124(a) which targets anyone who "excites or attempts to excite disaffection towards the Government".

After the warrant was issued, Wirathu posted on his social media page a summons dated May 22 from the country's highest Buddhist authority, the State Sangha Maha Nayaka.

This is a state-appointed body of high-ranking monks overseeing the clergy across Buddhist-majority Myanmar.

The letter ordered him to report to its Yangon headquarters Thursday for a reprimand over his "involvement with social affairs during a rally".

Wirathu told local media by phone Wednesday he was in Yangon ahead of the meeting, but said the police had not yet come for him.

"If they want to arrest me, they can do it," the Irrawaddy newspaper quoted him as saying.

The exact reasons behind the warrant have not been given but the rabble-rousing monk has given several provocative speeches at nationalist rallies recently.

"She just dresses up like a fashionista, wears makeup and walks around in stylish, high-heeled shoes, shaking her ass at foreigners," he told a cheering crowd.

At another rally in Yangon he caused widespread offence by saying "soldiers protecting the country should be worshipped like Buddha".

Wirathu is no stranger to jail.

He was sentenced in 2003 to 25 years behind bars under the former military junta on charges including preaching extremism and distributing banned books.

As the country opened up, he was released in 2012 alongside several thousand political prisoners.

He immediately returned to his hardline preachings, calling for boycotts of Muslim-owned businesses and restrictions on interfaith marriages.

The abbot appeared on the cover of "Time" magazine as "The Face of Buddhist Terror" in 2013.

In 2015 he called UN special envoy Yanghee Lee a "whore".

The Buddhist authority had previously prohibited him from speaking in public for a year after he delivered "hate speech against religions" -- but the ban expired in March last year.

Facebook blacklisted him in January 2018 after a string of incendiary posts targeting the Rohingya.

Rights groups say these helped whip up animosity towards the community, laying foundations for a military crackdown in 2017 that forced some 740,000 to flee to Bangladesh.

Like many in Myanmar, Wirathu pejoratively refers to the minority as "Bengali", implying they are illegal immigrants.

Refugees' testimonies of mass killings, rapes and arson spurred UN investigators to call for the prosecution of top generals for "genocide" and the International Criminal Court (ICC) is conducting a preliminary probe.

"The day the ICC comes here... is the day Wirathu holds a gun," he told a rally last October.