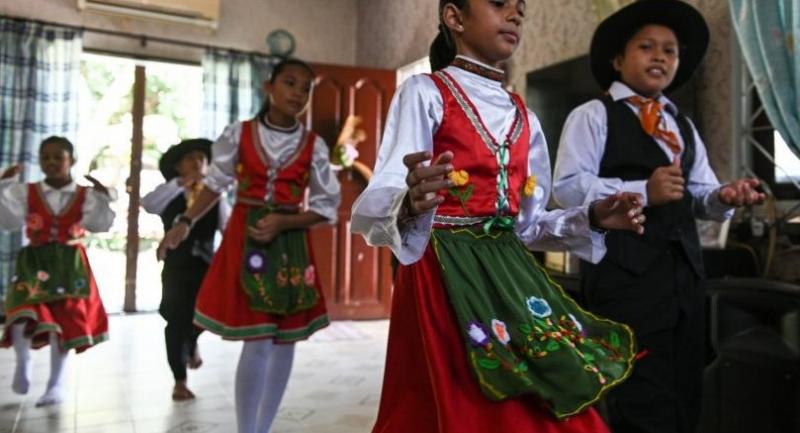 his picture taken on May 11, 2019 shows students dressed in traditional Portuguese outfits dancing before learning the Kristang language at the Portuguese Settlement in Ujong Pasir, Malacca.//AFP

Malacca, Malaysia - Children in colourful outfits sing in a creole of Portuguese and Malay during a class in the historic Malaysian city of Malacca, part of efforts to stem the decline of the centuries-old language.

Sara Santa Maria runs the weekly classes at her home to ensure the younger generation learn "Papia Kristang", one

"I definitely fear Kristang could disappear," the 50-year-old teacher told AFP, as the youngsters dressed in

"Many Eurasians have moved out of the settlement and the children only speak Malay and English," she added,

referring to an area of Malacca that has traditionally been home to speakers of the language.

Kristang developed after the Portuguese took over the strategic port city on the Straits of Malacca, one of the world's

most important shipping routes, about 500 years ago and colonisers married local women.

It was an era when tiny Portugal had a global empire and Malacca, a centre of the lucrative spice trade, was a key

prize for rival powers. After Portuguese rule, the Dutch colonised it and later the British took it over until Malaysian

The city on Malaysia's west coast still has vestiges of colonial rule which have made it popular with tourists, including

red-walled Dutch buildings and a gate house which is all that remains of a once-mighty Portuguese fortress.

spoken language in Malaysia -- and it is also influenced by Chinese and Indian languages.

As well as in Malaysia, it is spoken by tiny communities in Singapore and Australia due to migration.

But it has been in decline for years. The language is not part of the school curriculum and the Eurasian community

has been steadily assimilated into the broader Malay-speaking community.

UNESCO, which lists languages in peril, classifies Kristang as "severely endangered" and says only about 2,000

It is just one of many tongues in danger, with the UN agency predicting that half the world's 6,000 languages will

disappear by the end of this century.

Despite the dire outlook, Kristang's melodic tones can still be heard frequently in the small Malacca settlement of

Ujong Pasir where the Portuguese Eurasian community has traditionally lived.

Groups of elderly men sit chatting in the language on the waterfront, and are enthusiastic about passing it on to the

"I and my wife speak the language with our five children, 11 grandchildren and our two-year-old great grandchild to

But he is all too aware of Kristang's vulnerability: "There is a danger that Papia Kristang will be spoken less and die

As well as Santa Maria's lessons, other moves are being made to save the language -- a Kristang textbook has been

produced, as well as a mobile app and a CD of Catholic prayers and hymns.

Kristang, and has taught the language to hundreds of students since 2016.

His grandparents spoke Kristang but he only learnt it in recent years before deciding to teach others.

"I had never learnt it growing up, so there's a strong passion and investment in learning the language and passing it

There is also great enthusiasm for the language among Santa Maria's students, which offers some hope for the

"Kristang is part of my identity and culture, I want to preserve it," said Gabriella Amber, a 12-year-old who has been

learning the language for five years.

"If we stop talking, I fear it will become extinct."