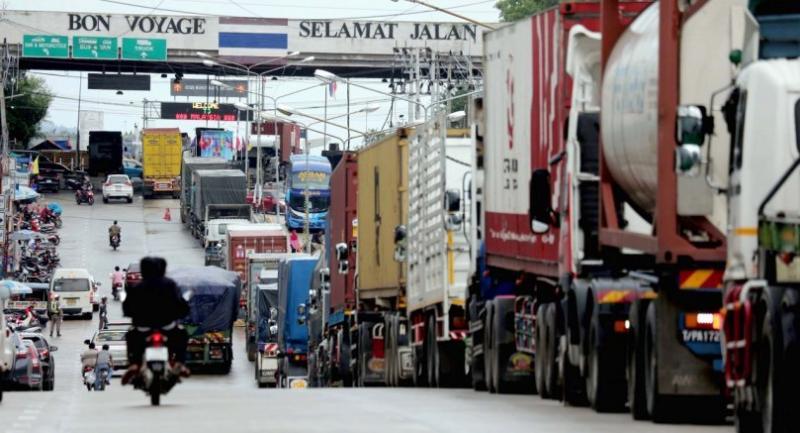 Two Asean members, Thailand and Malaysia, have reached an agreement to extend the office hours of their border Customs houses at Sadao ( Songkhla province) and Bukit Kayu Hitam on the Malaysian side. // Charoon Thongnual

DESPITE only bleak chances of concluding negotiations on the Regional Comprehensive Economic Partnership (RCEP) by the end of this year considering little tangible progress has been made in the past six months, Thailand maintains the historic deal involving 16 economies can be finalised by November.

Experts and observers believe a breakthrough in concluding the world’s biggest trade deal would showcase the success of ‘Asean centrality’. Asean economic ministers will meet during the 34th Asean Summit from tomorrow to Sunday to discuss the RCEP negotiations.

The RCEP has been envisioned as a 16-country mega-trade pact encompassing 10 Asean nations as well as India, China, Japan, South Korea, Australia and New Zealand. Negotiations have been going on for seven years.

“As global trade has been rocked by the ongoing US-China trade tensions, all 10 Asean members have voiced support for completion of the RCEP negotiations by the end of this year,” said Auramon Supthaweethum, director-general of the Commerce Ministry’s Department of Trade Negotiations.

Due to the superpower trade conflict, Thailand’s exports to China have been dwindling in the past year. In the first quarter of this year, Thai exports to China fell by 8.1 per cent year on year. The drastic fall in shipments led to a trade deficit of $1.45 billion in April, according to the Commerce Ministry.

Completing the RCEP negotiations will allow Thailand to expand its export destinations and trade freely with more countries, Auramon said.

“For this reason, completing the RCEP negotiations is Thailand’s top economic priority as Asean chair. It is our toughest challenge and if successful, it will be our biggest achievement,” she stated.

If the negotiations are successful, RCEP will be the largest multilateral trade pact in history. The combined gross domestic product of RCEP members makes up 28 per cent of global GDP and as much as 30 per cent of the value of world trade.

When Singapore chaired Asean last year seven of the 20 chapters of the RCEP agreement were concluded, leaving Thailand with the task of concluding up to 13 chapters. Six months have gone by after Thailand assumed the chair but not a single additional chapter has been completed.

“However, significant progress has been made in various chapters covering issues such as trade in goods and services, competition regulation and investment,” Auramon said.

There are various chapters, she explained, where negotiations are nearly complete but some countries have been holding up the conclusion of these chapters to use them as leverage for negotiating other outstanding chapters.

Local elections in various RCEP members have also delayed progress on the trade negotiations in the first six months. Thailand and Indonesia held general elections in March and April respectively. The Indian general election was held in seven phases from April 11 to May 19. These elections may have led many RECP members to wait to negotiate with the newly elected governments, Auramon said.

Meanwhile, there are also some RCEP members who do not have a free trade agreement with one another, such as China and India, the trade official said. This lack of foundation means the establishment of a common position on various chapters such as the rules of origins for exports between members could require more time.

Auramon expects the RCEP negotiations to be completed by November with the signing ceremony for the trade pact to be held in 2020.

After the trade agreement is signed, each country will then have to ratify the trade deal in their respective parliaments, she said, hoping that the RCEP will be officially enacted sometime in 2020.

“Completing the RCEP is not just significant for Thai trade, but it is also symbolic of Thailand’s commitment to pushing forward the notion of ‘Asean centrality’,” said Piyanat Soikham, a lecturer in politics and international relations at Ubon Ratchathani University.

Yan Xuetong, chief of the Institute of International Relations at Tsinghua University, stated: “Even if the negotiations are not fully completed by the end of this year, Thailand must keep the dialogue on issues such as RCEP on the table while it chairs the grouping to ensure the region remains one entity and that cooperation in the region continues to progress gradually.”

Despite the rising trend of bilateralism, Asean is an export-reliant region that champions multilateral free trade. Establishing the RCEP by the end of this year will help Thailand find its place in the shifting global supply chain and cope with the negative impacts of uncertain trade conditions in the upcoming years, said Matthew Circosta, an analyst for Moody’s Investors Service (Singapore).