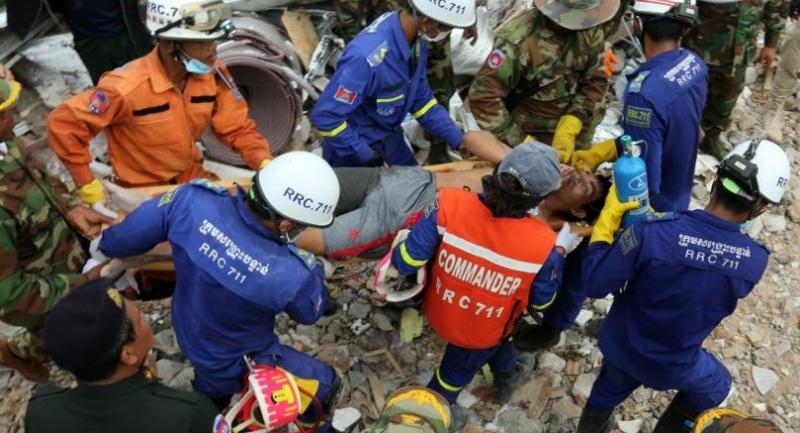 One of two survivors is carried out of the rubble from a collapsed building in Sihanoukville on June 24. //AFP

Sihanoukville, Cambodia - Two men were pulled alive from the rubble of a collapsed Cambodian building on Monday, more than two days after a construction site accident that left at least 28 dead.

Hopes that more survivors would be found under the debris had all but faded, but against the odds two people were cut free from the tangled wreckage and carried out alive.

"I heard the sound of rescuers, I called for help but they didn't hear me," Ros Sitha, one of the two found alive on Monday, told AFP.

"There was a dead body near me. I didn't have water to drink," the forty-one year old said from his hospital bed.

"I am so lucky to survive."

Sitha's wife earlier told AFP she had "no hope" her husband and nephew would be found alive. The two men said they are both bruised and weak but have no serious injuries.

The seven-storey Chinese-owned building folded in on itself before dawn on Saturday as scores of workers slept within the under-construction building in Sihanoukville.

Cambodian prime minister Hun Sen on Monday declared the rescue and recovery operation over with 28 dead and 26 injured.

He added the probe to establish if the building was constructed legally is ongoing.

The premier visited the scene of the collapse in Sihanoukville before daybreak on Monday where he watched the rescue of the two survivors -- climbing into their ambulances to see them before they were taken to hospital.

He has ordered inspections of all building sites in the beach town, which is undergoing a Chinese-bankrolled development boom. Condos and hotels are springing up to cash in on the surge in Chinese visitors to its dozens of casinos.

The governor of Preah Sihanouk province, meanwhile, resigned on Monday.

Yun Min accepted he had made a managerial "mistake", according to a post on Hun Sen's Facebook page.

Three Chinese nationals and a Cambodian landowner have been held for questioning over the building collapse.

Residents near the disaster scene said they had long feared tragedy was imminent.

"These buildings are coming up in just a year," said Sock Dara, 45.

"We have been concerned for a long time about the quality of these Chinese buildings."

Authorities on Monday put the death toll at 25 shortly before an AFP reporter witnessed rescuers pulling out three more bodies from the debris, bringing the total to 28.

Distraught relatives at a local hospital said around a dozen people were believed to still be entombed in the concertinaed floors.

The once-quiet fishing village of Sihanoukville has seen a remarkable Chinese construction boom driven by the need for rooms for tourists flocking from the mainland to its dozens of casinos.

The Chinese embassy in Cambodia, a strategically important ally to Beijing with ports and borders to other Mekong countries, expressed their condolences and backed a "thorough investigation" of the role of the three Chinese nationals and the cause of the accident.

There are also thousands of Chinese workers employed on Beijing-funded projects, fuelling tension with local labourers who envy their better pay and conditions.