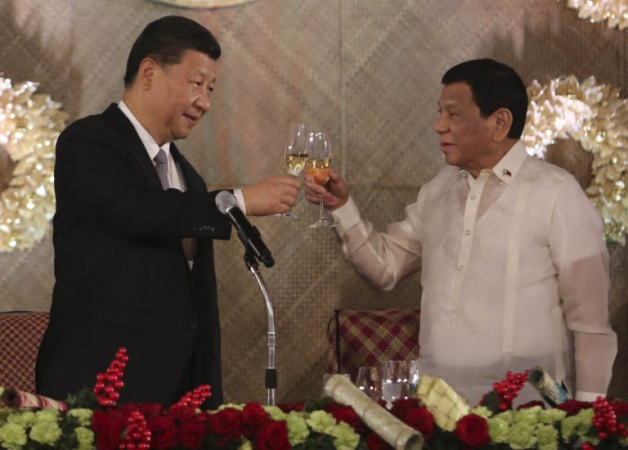 Presidential spokesperson Salvador Panelo described as word of honor the verbal understanding for the Chinese to be allowed to fish in Philippine waters reached by President Duterte and Chinese President Xi Jinping during a bilateral meeting in 2016. —MALACAÑANG PHOTO

MANILA, Philippines — There is no written agreement between President Rodrigo Duterte and Chinese President Xi Jinping that allows the Chinese to fish in Philippine waters, Malacañang said on Monday.

Presidential spokesperson Salvador Panelo said the agreement referred to last week by the President was just a verbal understanding reached by the two leaders during a bilateral meeting in 2016.

“I think there was no signing involved. They only talked. You know, heads of state have their word of honor. There was no need for that,” Panelo said.

The President mentioned the deal on Monday last week in explaining why he could not bar the Chinese from fishing in the West Philippine Sea, the waters within the Philippines’ 370-kilometer exclusive economic zone (EEZ) in the heavily disputed South China Sea.

He said the agreement allowed Filipinos to fish again at Panatag Shoal, also known as Scarborough Shoal, which China blockaded after seizing it from the Philippines in 2012.

“Remember we weren’t allowed in Scarborough (Shoal) before. They were being shooed away. But after that (the agreement), things were OK,” Panelo said.

Asked whether the agreement was legally binding, Panelo replied: “Why not? What’s wrong with that?”

He added: “Even in law, even it’s verbal, it’s still valid and binding, as long as there is mutual consent between the two parties. That’s why it’s an agreement.”

Lawmakers and maritime law experts said the deal was a violation of Article XII, Section 2 of the Constitution, which requires the state to protect Philippine territory and reserves the use of the country’s marine resources for Filipinos.

They said that such a deal needed congressional approval and that the President could be impeached for violating the exclusivity clause.

Their comments angered the President, who on Saturday threatened to arrest those who would bring a complaint for his impeachment.

Gen. Oscar Albayalde, the Philippine National Police chief, on Monday said he would obey a presidential order for the arrests, but stressed that there should be investigations first.

Told that filing an impeachment complaint against the President was not a crime, Albayalde said other offenses could be cited, such as sedition and libel.

Vice President Leni Robredo, speaking on her radio program on Sunday, called for transparency from Malacañang on the deal with Xi.

“[W]e do not know the terms of [the] agreement. If this is… a treaty, then it has to be approved by Senate,” Robredo said.

The Vice President insisted that the government must defend Philippine waters and ensure that only Filipinos would benefit from resources found in the country’s seas.

But Panelo said he agreed with the President that forcing the implementation of the exclusivity clause would be “courting danger.”

“China would not want that,” Panelo said.

China claims nearly the entire South China Sea, including the greater part of the Philippine EEZ and waters close to the shores of other Southeast Asian claimants in the strategic waterway — Brunei, Malaysia and Vietnam.

In 2016, however, the UN-backed Permanent Court of Arbitration in The Hague, ruling on a challenge brought by the Philippines, declared China’s claim had no basis in international law and said it violated the Philippines’ sovereign right to fish and explore resources in its own exclusive economic zone.

China ignored the ruling and went on to build artificial islands on seven Philippine-claimed reefs in the South China Sea that it later developed into military outposts.

The President also set aside the ruling in exchange for aid, loans and investment from China.

Last week, after drawing flak for his refusal to enforce the exclusivity clause, the President said the proviso was meant only for the “senseless” and “thoughtless” among his critics.

The Palace defended the President’s remarks, saying he was actually going beyond the provision and carrying out the government’s prime duty of protecting the nation.

“What use is that provision if you aggressively enforce the arbitral ruling and it will precipitate and trigger armed conflicts between the two sides?” Panelo said.

President Duterte said Xi had warned that China would go to war if the Philippines insisted on its claim over the South China Sea.

Panelo on Monday said the exclusivity clause was the basis of the verbal understanding with Xi.

He dismissed Bayan Muna’s criticism that the agreement was disclosed only last week, saying it had been mentioned a couple of times in the past.

“We’ve been saying that even before, even myself. There was a deal, that’s why Scarborough Shoal was resolved,” Panelo said.

He, however, said the deal did not mean the Philippines would no longer assert its rights in the South China Sea.

“That’s the modus vivendi. We’re giving way as of now. But it doesn’t mean that we won’t invoke it in due time,” Panelo said, referring to the Hague court’s ruling.

Besides the fishing deal, the President also spoke last week about the apparent falling through of a proposal for joint exploration for oil in the West Philippine Sea between China and the Philippines.

“Since I cannot assert jurisdiction, I then said, ‘So let’s split it.’ They agreed. They said, ‘For you, mayor, we will agree to 60-40.’ Now nobody’s talking about it,” the President said in an interview.

He also recalled how China warned of “trouble” if the Philippines insisted on drilling for oil at Recto Bank.

Panelo, however, said on Monday that the Palace remained hopeful that the joint exploration would still push through.

“We can still talk about it. Friends are able to talk about anything,” Panelo said.