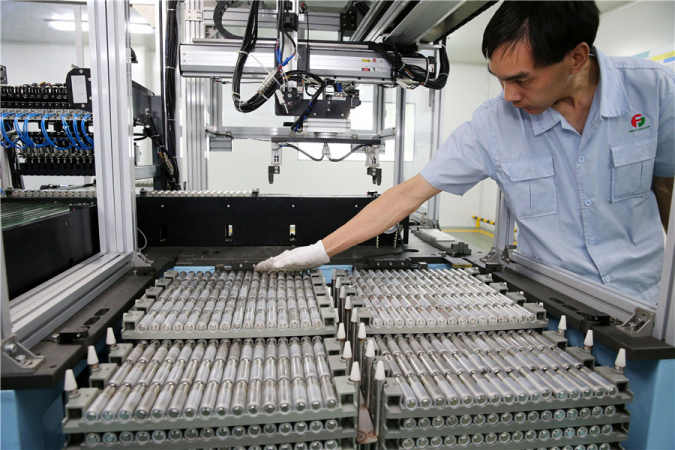 Heavy metals and other materials found in spent fuel cells can pose a risk to humans, animals and the planet. Hou Liqiang reports.

With more than 2 million electric vehicles on the country's roads last year, China is spearheading the global development of new energy transportation.

While the development has been praised in many quarters, the country's ambitious plans to promote e-vehicles, which will be implemented in a number of regions, will present environmental challenges because of the need to neutralize and dispose of large numbers of spent batteries.

Government-backed pilots to establish a system for the recycling of the fuel cells, which fall into the lithium-ion category and contain polluting heavy metals, have been put in place as authorities ratchet up preparations, and several regulations have been introduced.

Experts said the country urgently needs to upgrade its processing technologies, most of which are derived from traditional metal smelting industries, to address the challenges resulting from recycling. More-specific standards should be drafted and greater importance attached to green designs to facilitate the dismantling and possible reuse of spent batteries, they added.

According to the Traffic Management Bureau at the Ministry of Public Security, about 2.6 million new energy vehicles were registered nationwide last year, with more than 80 percent of them being powered by electricity. The bureau said the number of new energy vehicles has risen by an average of 500,000 annually in the past five years, and that trend will accelerate.

Plans have been formulated in many areas to promote new energy vehicles. For example, Hainan province has pledged to phase out sales of gasoline-powered vehicles on the island by 2030. On July 2, Shen Xiaoming, Hainan's governor, announced that starting this year all additions and replacements to public sector vehicle fleets, including buses and government cars, will run on clean energy.

However, the batteries that power the vehicles have to be replaced once their storage capacity falls below 80 percent, while their service life ranges from five to eight years, depending on the frequency of charging. This means the batteries are retired long before the vehicles they power.

While several bodies have produced different estimates of the number of spent batteries that will require disposal, they all agree on one thing - they will arrive soon.

However, a report released last year by three expert bodies, including the Institute of Process Engineering at the Chinese Academy of Sciences and the Chinese Research Academy of Environmental Sciences, estimated that the number will exceed 400,000 tons by 2022.

Spent batteries can pose both safety and environmental risks. Though no longer useful, they still contain a charge, and the heavy metals in them, such as cobalt and nickel, along with organic matter and carbon materials, can cause pollution.

Zhang Tianren, chairman of Tianneng Group, one of China's largest battery manufacturers, said many of the spent cells could be used for power storage in the telecommunication sector if they are still in good condition.

However, they will still need to be disposed of sooner or later, and improper disposal could result in severe water and soil pollution.

"It is hard to restore soil that has been penetrated by heavy metals, even decades later," he said.

Sun Zhi, a researcher with the CAS institute, said the methods of extracting metals from spent batteries derive from traditional metal smelting industries, and while many companies have the requisite abilities, it is still a major challenge to extract all the resources and avoid pollution at the same time.

According to the institutes' report, many processing technologies can result in the release of pollutants that pose severe threats to people, water and soil.

One of the major challenges comes from the disposal of the electrolytic fluid that carries the electrical charge, because the present method generates wastewater or gas that contains fluorine, which can be harmful to human health.

Most of the systems consist of interconnected battery packs composed of multiple cells, but a lack of universal standards in the structure and packing of the cells poses a major challenge for processors, experts said.

According to Sun, it is difficult to use automated equipment to dismantle the battery packs because they come in a variety of shapes and sizes, which raises costs. Moreover, as a safety measure, manufacturers usually insert resins into the packs to lock the cells in place during use, which adds to the difficulty in dismantling them.

"The efficient extraction of valuable metals from the cells is a crucial part of processing," he said, adding that the design of battery systems needs to be optimized to address challenges in the extraction process.

Because some spent cells or even entire packs could still be used to store power, Sun called for more attention to be paid to upgrading battery design to facilitate reuse.

Zhang, Tianneng's chairman, noted that extraction technologies are not cost efficient. "The cost of processing some types of battery is higher than the value of the recycled materials," he said.

There are different types of batteries, composed of different materials. The processing costs and the value of the recyclable materials they contain vary from battery to battery.

He added that China imports most of the lithium it uses, so the development of mature extraction technologies could help relieve the country's reliance on supplies from overseas.

Zhang called on the government to provide stronger, preferential tax policies to boost development of the sector, and said subsidies should be offered to companies or institutes that are tackling the hard issues in battery processing.

Wang Yi, vice-president of the CAS Institute of Science and Development, said authorities should pay special attention to minimum charging times during the batteries' service lives.

When authorities mull standards for minimum charging times, the environmental cost of a battery's entire life cycle, including disposal, should be calculated to ensure that new energy vehicles can play their expected role in environmental protection, rather than posing more risks, he added.

Early last year, the Ministry of Industry and Information Technology and five other government bodies published a guideline on management of the recycling and reuse of spent batteries.

The guideline was aimed at introducing an "extended producer responsibility" system in the industry, under which manufacturers will shoulder the responsibility of disposing of spent cells.

Meanwhile, a guideline the ministry published in July last year pledged to build a "traceability management system" that will cover every procedure related to batteries, from production to recycling and reuse.

Last year, pilot programs were launched in 17 provincial-level regions to explore a mechanism for the management of spent batteries.

Despite the challenges, Sun said he is optimistic about the future of the sector, and he expects China to play a leading global role, given that other countries have yet to see large-scale retirement of lithium-ion batteries.

"Many companies are paying attention to the sector, as are a lot of institutes. The government is also attaching great importance to it. Given this, we should be able to perform the task (of disposal) well. However, it will take time and we will need to bring the advantages offered by different sectors fully into play," he said.