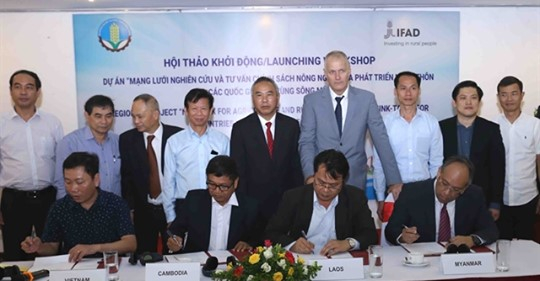 Participants at a workshop in Hanoi come together to plot strategies for greater cooperation on agriculture among countries in the Mekong subregion.

Vietnam wants to foster co-operation between countries in the Mekong subregion and share experiences in agricultural and rural development through policy advisory networks of not only government agencies but also non-governmental organisations and the private sector.

Deputy Minister of Agriculture and Rural Development Phung Duc Tien made the comments at a workshop held to launch the project “Network for agriculture and rural development think tanks for countries in Mekong subregion” (NARDT) in Hanoi on Tuesday.

Agriculture had played an important role in the economic development and social stability of regional countries such as Myanmar, Laos, Cambodia and Vietnam, he said.

Despite the fact that agricultural production of countries in Mekong sub-region had improved in recent years, it still faced difficulties due to limited resources and low productivity. The decline in agricultural growth and large income and living standard gaps between urban and rural areas were also a challenge, Tien said.

To deal with these, countries in the subregion had reformed their policies. The official noted that Cambodia was a good example of a country developing high quality rice brands and building value chains to enter high-end markets. Laos was experienced in developing clean and sustainable agriculture while Myanmar had a lot of experience in rural development through the role of the community.

“With the help of IFAD (International Fund for Agriculture Development) and active co-ordination between Mekong subregion countries, this project will help improve the effectiveness of policies in the Mekong sub-region while strengthening partnerships and promoting the development of effective and responsible trade and investment between the countries in agricultural and rural development,” he said.

They would share knowledge through information exchanges and advocacy activities as well as capacity building for organisations and individuals that do policy research. Joint research and policy dialogues would be held to address development issues in the region, he said.

The workshop later saw the signing of a co-operation agreement to develop the NARDT network in the region and in each country. Signatories included the IFAD and the founding members of the NARDT network including the Institute of Policy and Strategy for Agriculture and Rural Development (IPSARD), Myanmar’s Centre for Economic and Social Development (CESD), Laos’s National Agriculture and Forestry Research Institute (NAFRI) and the Cambodia Development Resource Institute (CDRI).

The project is funded by the IFAD and implemented by the IPSARD.