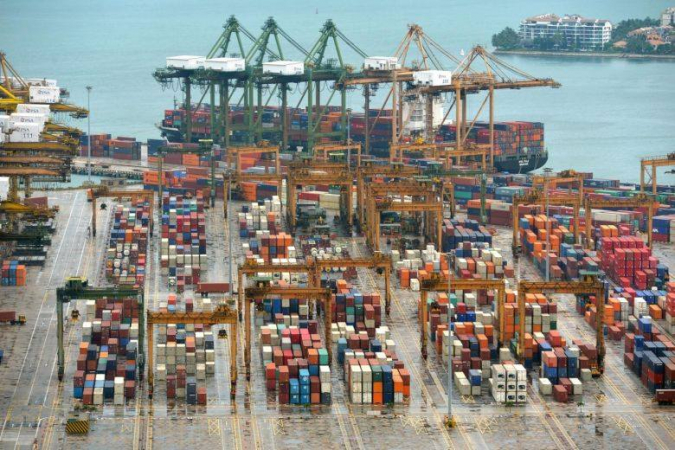 Singapore's exports fell by double digits for the fourth straight month in June, with shipments in the key electronics sector sinking by nearly a third.

Non-oil domestic exports (Nodx) performed worse than expected, slumping 17.3 per cent year on year, following a downwardly revised 16.3 per cent fall in May, said Enterprise Singapore in a report today.

This is the biggest year-on-year drop since shipments sank 33.2 per cent in February 2013.

It is also sharply below analysts' expectations of a 9.6 per cent plunge, according to a consensus of forecasts in a Bloomberg poll.

CIMB Private Banking economist Song Seng Wun noted that last week’s flash figures for Singapore’s second-quarter growth – which came in almost flat at 0.1 per cent – gave a signal that both trade and manufacturing numbers were going to be markedly worse than expected in June.

“The recent set of bad data has dashed any hope of a recovery in the second half of this year,” he said, adding that typically, figures would stabilise by the middle of the year.

“But instead we see further decline, and the pace of decline has also accelerated,” he added.

“What we can hope for in a best-case scenario is for the numbers to start to stabilise towards the fourth quarter.”

While he expects the economic slowdown this time to be more severe than in the period from 2013 to 2015, he noted that the current situation is not yet near what was seen in the global financial crisis around a decade ago.

He foresees a challenging outlook for workers, with retrenchments likely to rise and job vacancies to decline.

Companies will also need to consider new sources of growth and it is time for the government’s monetary and fiscal policies to turn accommodative, he said.

Maybank Kim Eng economists Chua Hak Bin and Lee Ju Ye said in a report that given the current recession risk and softer core inflation, they expect the Monetary Authority of Singapore to ease the appreciation slope of the Singapore dollar in October, to a neutral bias or zero appreciation. Currently, it is on a modest and gradual appreciation stance.

Wednesday's (July17) report on exports showed electronic shipments plunging by 31.9 per cent last month, extending a 31.6 per cent drop the month before – dragged down by shipments of integrated circuits, personal computers and disk media products.

Song added: “Within the chip segment, we have already seen many downbeat assessments from chipmakers, equipment makers, cutting their sales forecast for the first time in four years.”

“The ongoing squabble between South Korea and Japan does not help matters either,” he added, referring to Japan restricting exports of critical materials used by South Korean chip manufacturers.

ING economist for Asia Prakash Sakpal noted that semiconductors are a key segment for Singapore. Electronic products form about 25 per cent of Nodx, almost half of which are made up of semiconductors, he said.

But he added that Singapore was not alone in posting poor export performance. “South Korea and Taiwan are suffering from this as well, although Singapore seems to be hit a bit harder than other economies.”

For non-electronic products, Nodx dropped 12.4 per cent, down from 11.1 per cent the month before, mainly due to lower shipments in non-monetary gold, petrochemicals and pharmaceuticals.

Overall, Nodx saw a month-on-month of 7.6 per cent in June, after a 5.8 per cent increase in May.

Weighing on the export outlook are trade tensions between the United States and China, weaker external demand and a fading semiconductor cycle.

Although trade talks have resumed behind the scenes after US President Donald Trump met Chinese President Xi Jinping at the Group of 20 summit last month, simmering tensions remain.

The US has continued to apply pressure on China, with President Trump looking to increase the US domestic content threshold for iron and steel in federal procurement.

Meanwhile, China's economic growth slowed to 6.2 per cent in the second quarter, its weakest pace in at least 27 years.

Singapore's exports to its top 10 markets fell in June, except to the US. Leading the decline were falling shipments to Hong Kong, China and Europe.

Sakpal of ING said: “Despite the trade war, shipments to the US continue to be very strong... Perhaps it is the underlying strength of the US economy. We have already seen from overnight data that retail sales in the US were surprisingly strong.”