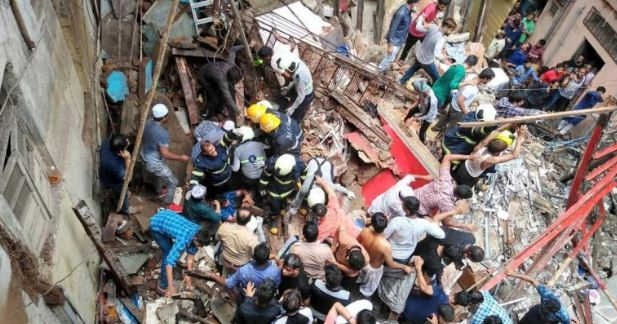 A massive rescue operation is underway in India

The death toll in the building collapse in India’s financial capital Mumbai rose to 14 on Wednesday as rescue operations continued for the second day after the 100-year-old structure crumbled to the ground under incessant rains on Tuesday.

The death toll is likely to go up further as the rescue operations progress, an official from the Mumbai disaster management cell said. Dozens are still feared trapped in the rubble.

At least 40 to 50 people were feared trapped under the debris of the four-storey building in the Dongri locality of Mumbai, local residents said.

The National Disaster Response Force (NDRF) is also carrying out rescue and search operations with the help of sniffer dogs.

Nine people, including two children, have been rescued so far.

Three NDRF teams were joined by the fire brigade, police and local residents in the rescue operations that continued through the night.

The rescue teams could not bring in heavy vehicles to remove the debris as the lanes in the Dongri locality are narrow with electric wires dangling overhead.

Residents formed a human chain to pass down, hand-to-hand, smaller pieces of debris such as wooden blocks and bricks towards the outer area of the neighbourhood.

A spokesperson for the NDRF said rescue team members had been told that there were customers at an eatery situated on the ground floor of the building when it collapsed but and no one knew the exact numbers.

The Chief Minister of Maharashtra state, of which Mumbai is the capital, has announced a compensation of Rs 5,00,000 for each for the next of kin of the deceased and Rs 50,000 each for the injured. All medical expenses of the injured will be borne by the state.

Mumbai Police has registered a complaint and begun investigations into the building collapse as the structure is thought to be an unauthorised construction.

Dilapidated, mainly unauthorised buildings dot the older areas of Mumbai many of which are still occupied by residents despite civic authorities’ warnings.

Real estate prices in Mumbai are among the highest in Asia and safe, affordable housing virtually non-existent.