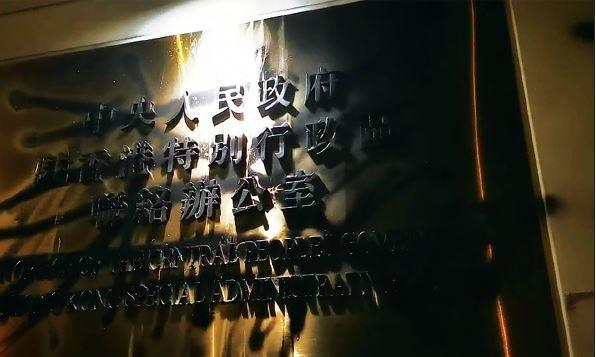 The plaque outside the Liaison Office of the Central People's Government in the HKSAR is defaced by protesters. (PHOTO / CHINA DAILY)

HONG KONG - Residents and shop owners on Monday blasted the violent and hostile besiege of the Liaison Office of the Central People’s Government in the Hong Kong Special Administrative Region in Sai Wan by masked protesters the day before.

Protesters should express their views in a peaceful manner instead of vandalizing public property funded by taxpayers’ money, a lady said.

An 81-year-old lady who lives in an adjacent building strongly condemned radical protesters’ vandalism of sidewalks.

Pried bricks and damaged barrier railing were seen in the vicinity of the building.

She said protesters should express their views in a peaceful manner instead of vandalizing public property funded by taxpayers’ money.

The protesters also defaced the national emblem at the office’s facade, threw eggs at and painted graffiti on the office's outer wall .

An owner of a laundry store nearby said he was worried about the tension in the society.

The 70-year-old retired civil servant said he hoped the deadlock could be solved through dialogue as soon as possible so that the Hong Kong government can return its focus to livelihood issues.

The traffic outside the Liaison Office was disrupted Sunday evening and has since resumed normal on Monday. Yet some shops in the area remained closed.

The defaced national emblem has been replaced with a new one at around 11 pm on Sunday.