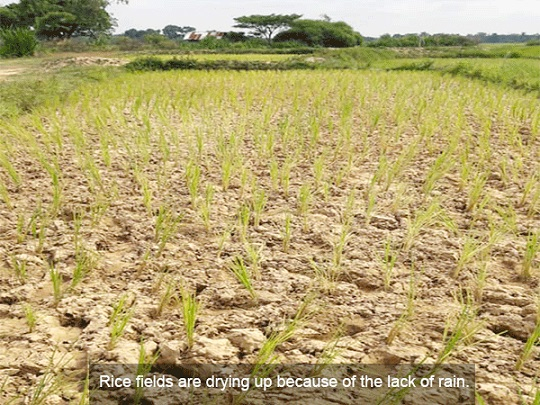 Low rainfall and high temperatures are destroying the crops of Lao farmers across the country against the backdrop of an ongoing drought in the Southeast Asian region.

Analysts say the lowest seasonal rainfall in decades will not only have a severe impact on farmers’ livelihoods but will also affect food security.

He acknowledged that the lack of rain had delayed rice production in the country’s 800,000 hectares of wet-season rice fields, but said exact figures concerning damaged crops had not been reported.

“Our ministry has told provincial and district authorities to send officials to help farmers immediately, not wait for official advice from the ministry,” Dr Bounkhuang said.

Regions that have water resources must help farmers to pump it into their fields. Meanwhile, provincial agriculture and forestry departments have been told to prepare fast growing rice varieties for farmers while they wait for the rains.

“It will be quite late to grow rice if the rains do not come in the next few weeks,” Dr Bounkhuang said.

“Our agriculture officials might encourage farmers to grow other crops that result in higher economic returns. Farmers who have borrowed money from banks need to report to authorities regarding the amount of damaged crops so the government can help negotiate with the banks.”

In Xayaboury province, a steering committee has been established to work closely with farmers in different districts.

Provincial Deputy Governor Mrs Bounphak Inthapanya said the province has encouraged both the public and private sectors to help pump water for farmers.

“We have asked private companies that have water pumps to give our authorities access to them so that we can pump water for farmers in affected areas,” she said.

At present, only 45 percent of 34,000 hectares of wet-season rice fields have been transplanted. Farmers in the province also grow other crops on 112,000 hectares of land.

Director of Xayaboury province’s Agriculture and Forestry Department, Mr Somvang Keolaysack, said that if there is no rain in the next few weeks these crops and rice will die.

“I’m very concerned about the rice crop in our province this year. If the drought continues our crops will die because there is no water and we could face a rice shortage in the year to come,” he said.

Elsewhere, Borikhamxay province has also been badly affected by the lack of rain.

A local farmer, Mr Ngeun, said “My rice seedlings are about to die due to a lack of water. Normally, I would have finished transplanting by this time of the year. I don’t know what has happened this year and why the rains are so late,” he added.