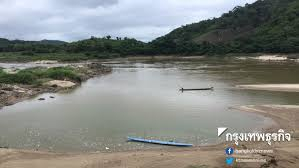 The level of the Mekong River - the longest river in Southeast Asia - will increase gradually in the coming weeks after falling to a record rainy-season low that is affecting farmers and businesses.

The Meteorology and Hydrology Department issued the forecast on Monday, suggesting that there will be more rainfall at the end of this month and early next month. The rainfall will result in a gradual rise in the level of the Mekong and its main tributaries.

This prediction is expected to ease concerns about the abnormally low water levels in the Mekong, which runs through China, Myanmar, Laos, Thailand, Cambodia and Vietnam.

Some hydroelectric dams have not been able to generate electricity due to the lack of rainfall in catchment areas, meaning there is insufficient water in reservoirs to generate power, the department said, citing reports from hydropower plants.

In addition, the Vientiane Water Supply Enterprise has informed the public that the low level of the Mekong means it is unable to supply water at full capacity, which could affect supply to households and businesses.

The low river levels and the lack of rain over so many months has also affected crops because of insufficient water for farmland, the Meteorology and Hydrology Department said.

In June, the level of the Mekong recorded at many stations between Vientiane and Pakxe in Champassak province was down by 10 to 40 percent compared to the levels measured from 2006 to 2018, according to the department.

This month the level dropped further on average as measured at stations located between Luang Prabang province and Pakxe and was down by 21 to 74 percent compared to the levels recorded from 2006 to 2018.

Statistics show that rainfall recorded since early July at various stations along the Mekong River was down by as much as 75.2 percent compared to the same period in previous years.

The Mekong River Commission (MRC), the international body whose members comprise the four lower Mekong countries of Laos, Thailand, Cambodia and Vietnam, said last week the level of the Mekong had fallen to an all-time low this rainy season.

The Commission, whose mandate is to push for sustainable development of the Mekong, reported that the river level during the early flood season from June to July was lower than that recorded in 1992, which saw the lowest flow on record.

The Commission observed that rainfall has been exceptionally low in the Mekong basin since the start of this year.