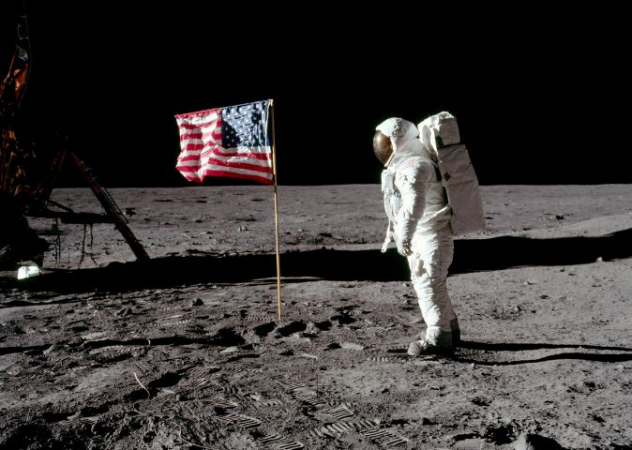 Astronaut Buzz Aldrin, lunar module pilot for Apollo 11, poses for a photograph besides the United States flag during an extravehicular activity on the moon, July 20, 1969 (Agencies photo)

A Chinese map of the stars is among a collection of old maps showcased by Cambridge University in the United Kingdom to mark 50 years since the moon landing.

A selection of moon and star maps have been featured in social media posts by Cambridge University Library to coincide with the Apollo 11 launch.

The original map is now lost but the university said that in 1247, a copy was engraved on a stone slab by Wang Zhiyuan, an official in charge of legal matters during the Chunyou reign (1241-1252) of Southern Song Dynasty.

It is the 19th century rubbing from this stone copy that is held in the collection.

In the 1990s, the Chinese government authorized 10 rubbings to be made from carved stone. Nine went to the Chinese museums and institutions, leaving only one available for private sale.

The History of Chinese Science and Culture Foundation in London believes it held the only original rubbing of the map in the West which was acquired by the Purple Mountain Observatory in Nanjing in the 1990s. The slab is now preserved at the Chinese observatory.

The auction house said rubbings taken from the stones are now highly regulated by the Chinese government in order to preserve the stones from further damage. Most of the existing rubbings are held in institutions within China.

According to the foundation, the text on the map says 1,565 stars are known, but only 1,440 of them have been depicted.

"The representations of the planets have an astrological rather than an astronomical purpose," the foundation said on its website.

Another map featured on the library's social media is Mare Tranquillitatis, a lunar mare, shown on the 1742 edition of Atlas Coelestis, which translates to Atlas of the sky.

The map was created by Johann Gabriel Doppelmayr, a German mathematician, astronomer and cartographer.

Another image shows the John F. Kennedy Space Center, from where NASA launched Apollo 11 on July 16, 1969.

According to library assistant Priyanka Pais, "These maps show iterations of the lunar landing site documented at different points in history."

As well as the digital display, the library will hold a small exhibition, only for the library's card holders, showcasing the maps shown online and some others from the library's collection on Friday.

As the images were beamed across the world, Armstrong's words, "one small step for a man, one giant leap for mankind", were etched into history.

The library's digital exhibition also features copies of national and local newspaper coverage from the time of the mission.

It will also host a program in August for visitors to discover space facts and science fictions from the modern collections, including early science fiction, reporting of the first moon landing and children's books relating to space travel.