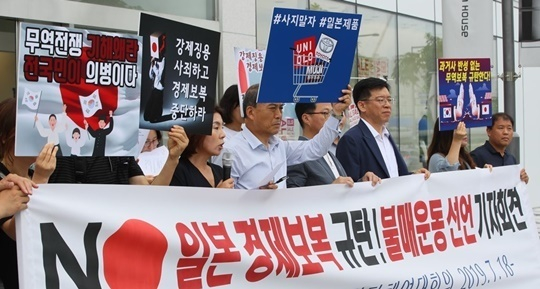 Citizens protest in front of a Uniqlo store. (Yonhap)

These days, Kim Hyun-jin feels uneasy telling others where he works.

“I have been working at Uniqlo for two years as a part-timer. I am proud of my workplace. It is a fun place to work, with nice people and relatively a good amount of pay,” said the 25-year-old student majoring in fashion at a university, who agreed to speak under a pseudonym.

“But now, when I say I work at Uniqlo, people think I’m doing something very wrong and it makes me feel very uncomfortable. I hope everything goes back to normal soon,” he told The Korea Herald, adding that the ultimate responsibility of taking issue with Japan should lie with the government.

Since Japan restricted exports to Korea of hi-tech materials used as key components in semiconductors and display panels, consumers here have been joining moves to boycott Japanese goods or anything related to the neighboring country.

Citizens protest in front of a Uniqlo store. (Yonhap)

According to the country’s largest discount chain E-mart, sales of Japanese beer brands such as Asahi from July 1 to 18 saw a 30.1 percent drop compared to June, while sales of Japanese instant noodles and condiments fell by 31.4 percent and 29.7 percent, respectively, in the same period.

“I do know that boycotting Japanese products would only dent Japanese companies, if it does anything at all. But the boycott is not specifically about making a specific company suffer, but about at least finding a way to show (the Japanese goverment) that we don’t forget,” said 43-year-old Kim Jeong-seol, who says he has stopped buying what he called “overtly Japanese brands.”

Cautious voices of concern have also been rising here over the efficacy of the wide-spreading boycott at the expense of Korean employees and other domestic firms closely associated with the Japanese brands.

Some 5,000 employees who work at 200 Uniqlo stores are among them, with some now worrying about their job security.

Uniqlo, which entered Korea in 2004 with a 51 percent investment from Japan’s Fast Retailing and the rest from Korea’s Lotte Shopping, is undoubtedly a Japanese brand. But more than 99 percent of workers here are Korean. Market rumors have circulated that Uniqlo is considering encouraging employees to take leave and reviewing restructuring, although the company has since denied it.

An employee working for a Japanese automotive brand in Korea said morale inside the company has been significantly affected by the ongoing trade conflict and boycott movement.

“After some Japanese companies here canceled or reduced the scale of their planned promotional events amid intense sentiment here, staff morale is extremely low, and we do not really know what to do except wait and see,” he told The Korea Herald.

With worsening consumer sentiment toward Japanese companies, some Korean companies have mistakenly been identified by some as being Japanese have even released statements explaining they are not.

E-commerce retailer Coupang recently released a statement explaining why it is not a Japanese firm, but rather “a proud Korean company.”

“We operate 99 percent of our business in Korea and have significantly attributed to creating jobs in Korea by hiring 25,000 employees and spending some 1 trillion won ($846 million) in wages,” Coupang said in a statement.

“We really do not know who spread such rumors, maybe someone who wants to hinder Coupang’s business growth and minimize the quality service that customers can get,” Coupang added.

Daiso, which is invariably mentioned in any boycott of Japanese products, also expressed its regret and said that Daiso Industries in Japan is the second largest shareholder of Asung Daiso in Korea with a 34 percent share, not the largest, and that the company does not pay royalties.

According to the company, 12,200 Korean employees work at 1,300 Daiso stores across the country, while about 70 percent of or 680 products sold at Daiso are manufactured through small and medium-sized companies here.

Industry insiders said that although there are understandable grounds for Koreans to boycott Japanese goods, they hoped the cause of the boycott could be resolved soon, considering the innocent parties caught in the crossfire.

“If the boycott continues, the movement can negatively impact the livelihoods and job security of employees, subcontractors and manufacturers who are all Koreans,” said one industry insider, wishing to remain anonymous.

What is a successful boycott?

Experts share similar views, citing how boycotts often lead to very little incentives or benefits to those participating in them.

“Many times, the benefit of a boycott, such as changing the unethical behavior of the target firm, is not in the hands of consumers,” said Kim Bang-hee, a columnist and chief of Kim Bang-hee Life and Economy Research Center.

“Lotte is also viewed as a Japanese company, but it is hard to consider it as a boycott target due to its impact on Koreans and their livelihoods here. That is why the most effective boycott which directly impacts Japan’s economy would be simply not traveling to Japan. Boycotting Uniqlo has less impact,” Kim said.

Observers also pointed to the asymmetry in trade between Korea and Japan that weakens the power of a boycott of Japanese products, particularly in this case where a country as a whole is targeted rather than a specific company.

“When you compare Korea and Japan’s bilateral trade, it is noticeable that what Japan imports from Korea can be substituted, while Korea cannot,” said Cho Kyung-yeob, a senior researcher at the Korea Economic Research Institute, during a seminar held at the National Assembly last week.

In this context, others pinpointed that the cause of the boycott -- trade restrictions believed to be connected to historical issues -- can and should be resolved through trade, diplomatic measures and government-level actions.

“(A boycott of Japanese goods) is understandable based on the sentiments of Koreans, but the impact is uncertain and such a movement can provide justification for Japan retaliate further,” said Huh Yoon, a professor of international studies at Sogang University.

“Those who run business related to a Japanese brands and (who are) hired by Japanese companies here are Koreans. We need to consider the possible damage that follows,” he added.

For a boycott campaign to thrive in the long term, some experts also pointed to consumers’ understanding of “responsible consumption” as key to leaving a lasting impact.

“Boycotts are collective endeavors and actions, but in their voluntary will. When the boycott becomes a long-term movement, consumers may feel tempted to let others make the sacrifice,” said Lee Eun-hee, a professor of consumer studies at Inha University.

Despite the hope of citizens joining the boycott to “teach Japan a lesson” through their collective action, some voiced concerns that the boycott itself could be politicized.

“It is utterly wrong for (Japan) to have brought in businesses in the political confrontation. However, the dichotomous way of depicting those buying Japanese goods as traitors and those boycotting as patriots also concerns me, especially if it is instigated on a government level,” said Lee Min-hee, a Korean worker based in Japan.