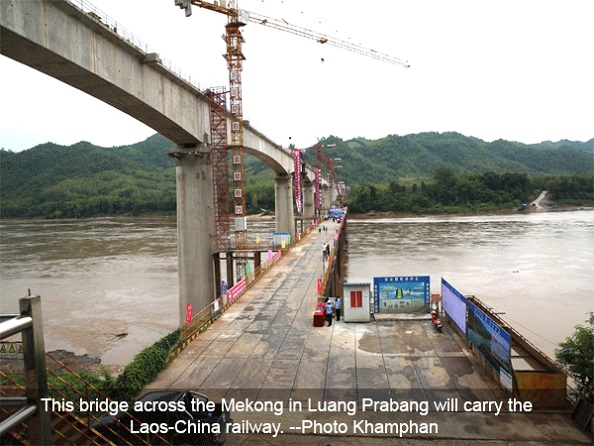 Construction of a bridge across the Mekong River in Luang Prabang which will carry the Laos-China railway is running ahead of schedule, according to Chinese construction companies.

The companies in charge of the bridge and railway construction project on Sunday invited local and foreign media to attend a ceremony to celebrate the connection of the two sides of the bridge.

The connection was completed seven months ahead of schedule, significantly accelerating the overall construction of the 414-km railway, which is slated for completion in 2021, according to information made available at the ceremony.

The 1,458.9-metre long bridge spans the Mekong between central Luang Prabang and the other side of the river in Chomphet district. The bridge has five main piers including 34 spans planted in the river.

The Laos-China Railway Company, which is in charge of the whole railway construction and operation project, said as quoted in Xinhua yesterday that construction of the Luang Prabang Mekong River bridge was one of the most challenging tasks.

This bridge is one of 160 along the total length of the railway and its construction involves some of the most complicated bridge building techniques.

Construction of the Laos-China railway, which is the first external rail route to connect to China’s rail network, began in 2015.

Chinese construction firms have promised that the railway will be completed and operational in 2021, in time for the 46th anniversary of the founding of the Lao PDR.

The railway is a part of the China-sponsored Road and Belt Initiative, which aims to connect China with neighbouring countries and beyond.

The railway, which runs from the Lao-Chinese border at Mohan-Boten to Vientiane is a part of the larger Kunming-Singapore rail link. It will have an operating speed of 160 km per hour.

Once the Laos-China railway is operational, transport between the two nations will be much cheaper than at present and improved connectivity will boost the exchange of tourists and goods between the two countries.