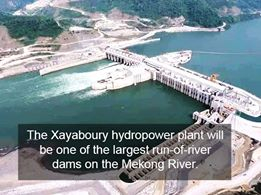 Government officials have dismissed social media reports that the Xayaboury dam is slowing the flow of water to downstream sections of the Mekong.

The dam is built on the run-of-river model, which does not require water to be stored, unlike the Nam Theun II and Nam Ngum I dams, the director general of the Department of Energy Business, Somphith Keovichith, told local media last week.

Water inflow equals water outflow, which is the concept behind a run-of-river dam, officials said.

Due to unseasonal low rainfall, the level of the lower Mekong and other rivers in Laos has fallen significantly, and rice farmers have been suffering the effects, Somphith said, adding that the low level of the Mekong has been attributed to unusually low rainfall in Luang Prabang and Xayaboury provinces and in areas north of the Xayaboury dam.

From January to July this year, the amount of rain recorded was the lowest in the last 10 years, Somphith noted.

A dam in China also resulted in less water flowing into the lower Mekong region, according to CK Power Plc.

According to an announcement issued by the company, which operates the Xayaboury dam, a trial run of electricity generation was conducted from July 15-29 ahead of engaging in full-scale electricity production for the Electricity Generating Authority of Thailand (Egat) by the end of this year.

It has largely been assumed that water retention was needed for this test and this had a knock-on effect downstream.

CK Power denied that the throughput of water has altered and suggested lack of rain was the reason for the low river levels, the Bangkok Post reported.

Construction of the dam began in 2012 after the government completed a consultation process with other countries through which the Mekong flows, in line with the 1995 Mekong Agreement.

The government expects to earn US$3.9 billion (Bt119.88 billion) from the operation of the dam throughout the 29-year concession period, including US$1.897 billion in royalties and US$637 million in taxes.

The government has pledged to use this money to fund poverty reduction programmes and infrastructure development so that Laos can catch up with other countries in terms of overall development.