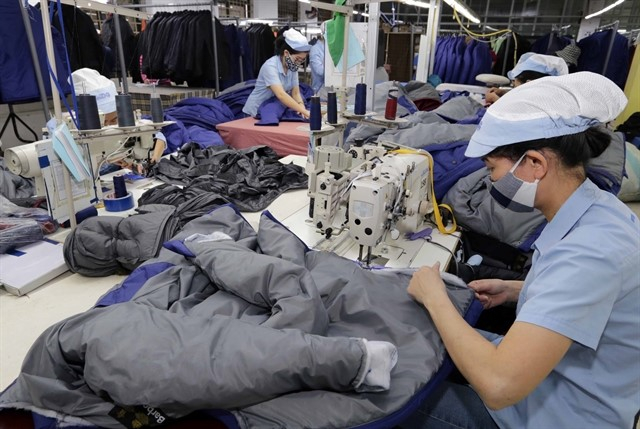 Coats are made at Duc Giang Co Ltd for exort to Europe. Vietnamese textile companies must be aware of origin and traceability regulations to increase their market shares in the EU amid the ratification of the EVFTA. (Photo: VNA/VNS Photo Tran Viet)

Vietnamese labour productivity is low compared to other Southeast Asian economies such as Thailand and Singapore, she explained, adding that the population is ageing and the number of workers is growing at a slow pace.

In recent years, Vietnam has faced stronger competition from Myanmar, Bangladesh and Laos in terms of labour costs, according to the Vietnam Textile and Apparel Association (Vinatex) chairman Vu Duc Giang.

There are three million workers and around 7,000 companies in the textile and apparel sector. Training facilities can only meet 1 per cent of the sector’s demand for skilled employees.

Most of the workers are trained by businesses and it takes a company between six and 12 months with salaries and financial assistance to produce one skilled worker.

Local companies may also lose workers to foreign direct investment (FDI) firms because they are willing to pay higher salaries.

In addition, the lack of a Government-level development plan for the textile and apparel sector has allowed local authorities to call for investment, resulting in the density of companies in the same location, Giang added.

Workers are free to move from a company to one another, making the structure of the firms unstable, he said.

The ongoing Fourth Industrial Revolution would make Vietnam less dependent on the low cost of labour as the manual stages would be handled by machines in the near future, Trang said.

However, Vietnam has an advantage over China in terms of lower labour costs, Vu Duc Giang noted.

The average salary of Chinese workers in the industry is US$700-800 (Bt21,500-Bt24,300) per month, double that of the Vietnamese, making China less competitive to Vietnam when luring investment for apparel production, Giang said during an online conference on the EU-Vietnam Free Trade Agreement and its impact on Vietam’s textile and garment sector.

All textile factories in China’s coastal areas have now closed and moved to the western region. They were forced to move business offshore and China has begun buying Vietnamese textile and apparel products, he added.

Working conditions have remained one of the key requirements set by strict markets such as Europe and Japan towards Vietnamese exporters.

According to Nguyen Thị Thu Trang, Vietnamese companies are also facing harder requirements in labour conditions in some markets such as Europe and Japan.

In the past, European consumers boycotted Bangladesh’s apparel exports because labourers were not treated well enough. This has not occurred in Vietnam.