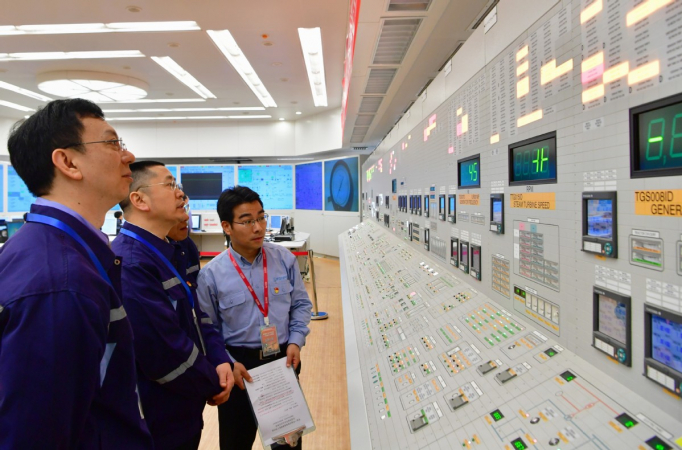 Third-generation technologies set to keep industry on even keel in nation, say experts

China's growing clean power demand has boosted the rapid development of nuclear power in the country, making it among the few in the world to have independently developed third-generation nuclear power technology, with a complete industry chain, industry experts said.

The first two reactor units using China's homegrown third-generation nuclear reactor technology Hualong One, or the No 5 and 6 reactors in Fuqing Nuclear Power Plant in Fuzhou, Fujian province, are expected to avoid time overruns, creating a record in the construction of the first reactor in a nuclear power project.

Currently, key goals in the construction of the No 5 reactor have all been fulfilled on or ahead of schedule, while devices necessary for the No 6 reactor have been prepared as per schedule, said Zhou Saijun, deputy chief engineer of the power plant affiliated to China National Nuclear Corp, or CNNC.

Hualong One technology, jointly designed by CNNC and China General Nuclear Power Group, adopts a double-layered containment system that can withstand large aircraft attacks, and has a water tank above the reactor that can be gravity-fed to keep the reactor cool.

Cold functional tests are carried out to confirm whether the circuit system and its supporting facilities are properly installed and ready to operate under high-pressure conditions. A hot functional test is a critical pre-operational test that simulates the temperatures and pressures the reactor systems will be subjected to during normal operation.

The No 2 and 3 nuclear reactors in Karachi, Pakistan, using Hualong One technology, are also making construction progress as per schedule.

Zhu Hongwei, deputy Party chief of the nuclear power plant, said the four reactors are the world's first-ever third-generation pressurized water reactors that are being built without any time overruns.

By the end of June, China had 47 reactors in operation with a capacity of about 48.73 million kW, and the nuclear power plants produced about 160 billion kWh of electricity in the first half of 2019, up 23.09 percent year-on-year and accounted for 4.75 percent of the total electricity generated in China, according to the China Nuclear Energy Association.

China is among the best in the world's nuclear power industry, with distinct competitive advantages to export nuclear power projects, he said.

Over 85 percent of components and devices of CAP1400, including key ones such as steam generators, pressure vessels, accumulators, and squib valves, can be domestically manufactured, thanks to efforts and innovations from both State-owned and private Chinese companies, while the rest can be sourced from multiple foreign suppliers, according to Zheng.

Both Zheng and He believe nuclear power will play a larger role in China's green energy mix, as China is committed to reducing carbon emissions and increasing energy accessibility.

Zheng said nuclear energy is the only form of energy that can provide carbon-free and large-scale stable power, compared with other forms of clean energy, such as wind and solar power.

He said nuclear energy could also be a disrupter for energy services in heating, hydrogen, desalination and other new applications in China beyond electricity.

The institute is also working on application of digital technologies within the whole life cycle of a nuclear power plant, combined with artificial intelligence, to maintain and ensure safety and reliability.