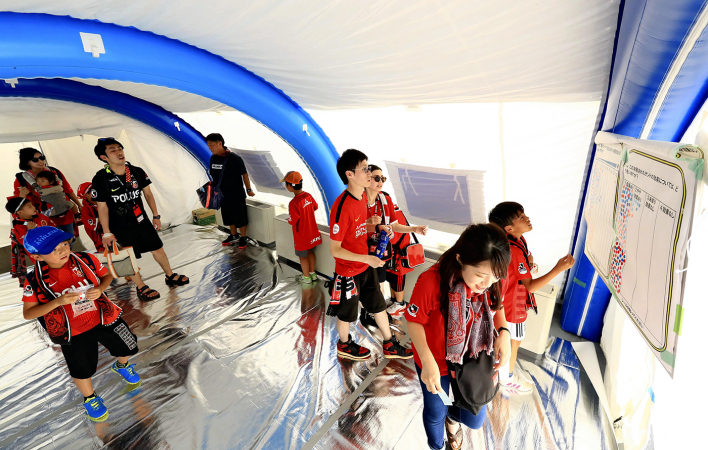 People walk through a tent-like covered passage that is cooled by an air-conditioning system using snow in front of Saitama Stadium in Saitama./The Japan News Photo

The system uses icy water made from natural snow saved in Minami-Uonuma. The cold air from the water is blown by fans to circulate in a 9-meter-long tent-like covered passage that arches up to about 2.5 meters tall.

The system was set up in front of Saitama Stadium, one of the soccer venues for the 2020 Tokyo Games, in Midori Ward, Saitama.

City officials were busy making icy water outside the tent. People inside the tent exclaimed that it felt cool and comfortable.

The temperature outside was almost 40 C, but inside the tent the temperature was kept at 30 C or below, according to the organizer.

"Beating the heat with snow will be the perfect omotenashi hospitality for visitors from overseas," a Saitama city official said.

Both cities will examine the results of the demonstration before deciding whether to introduce this natural air-conditioning system for the Tokyo Games.