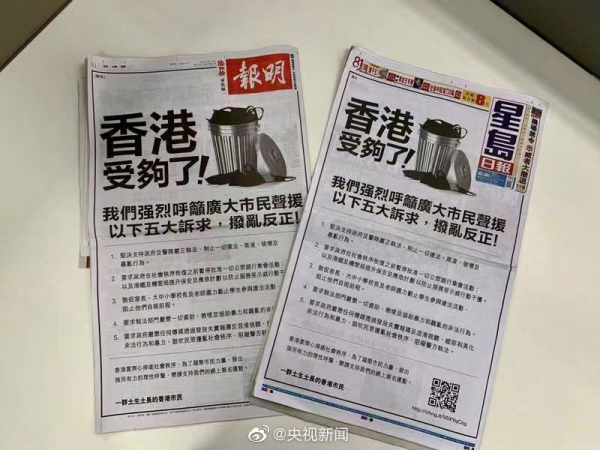 A joint statement signed by "a group of people born and raised in Hong Kong" was published on the front page of several Hong Kong newspapers on Thursday, initiating an online petition and calling for public support for putting an end to the ongoing violence and chaos in Hong Kong. [Photo/CCTV]

People from all walks of life in Hong Kong formed a united front on Friday to speak out against violence after the city has endured radicalism and unrest since mid-June as a result of repeated protests.

Business tycoons like Li Ka-shing and entertainers including Charmaine Sheh expressed their concerns over the escalating violence and called for the restoration of the rule of law.

Their appeals came amid worries of more possible clashes over the weekend between radicals and the police and a call for students to boycott classes as the new school year begins in about two weeks.

After the city's economy and people's livelihoods started to feel the pinch from the monthslong turmoil, Hong Kong billionaire Li Ka-shing took out advertisements in several local newspapers on Friday urging an end to violence. Earlier, another tycoon, Peter Woo Kwong-ching, also spoke out against the unrest. 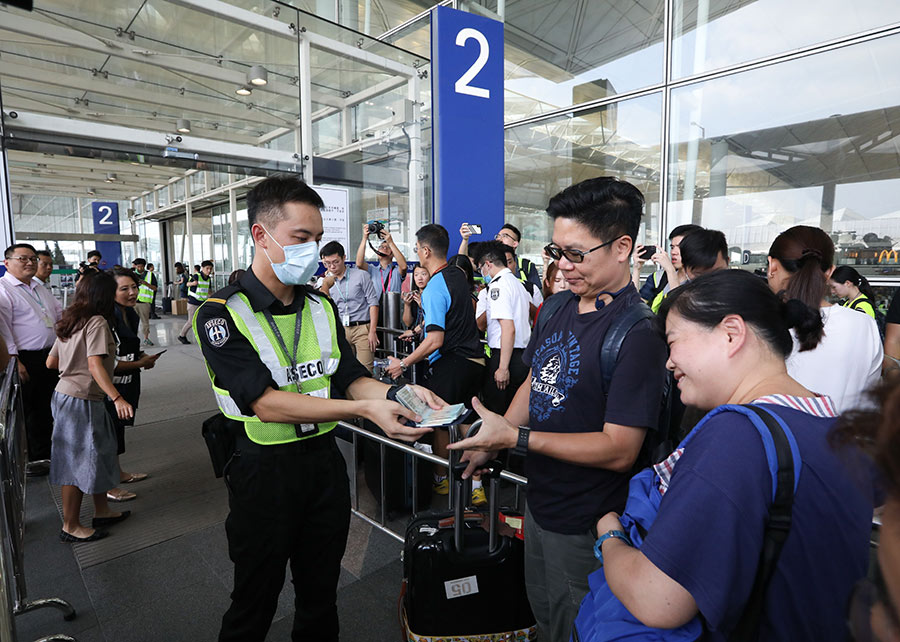 Hong Kong's pop stars and celebrities on Friday also called for the return to law and order in the city. Actress Sheh, actor Shawn Yue Man-lok and singer Yeung Chin-Wah all stressed that Hong Kong is an inalienable part of China.

The Motion Picture Industry Association in Hong Kong said in a statement that the people of Hong Kong have a right to pursue their political agendas, but they can't cross the bottom line of humanity and morality. Nor should they endanger others and destabilize society, or harm national sovereignty.

"If such antagonism and rifts continue, Hong Kong will lose its glory and be beyond redemption," the statement continued.

Multinational firms in Hong Kong and chambers of commerce have also warned against the impact of escalating violence and disruptions to Hong Kong's economy, residents' livelihoods as well as the city's image abroad.

Peter Wong, deputy chairman and chief executive of the Hongkong and Shanghai Banking Corporation, said that as a global financial center, Hong Kong has a solid foundation and its hard-won position and reputation should be cherished by its residents.

Though people expressing their opinions peacefully should be respected, "violent incidents have been going on one after another and the situation is getting worse, affecting local people's livelihood and endangering public safety", Wong said.

Police received more than 1,280 objections from various groups and individuals against the planned marches at the three locations, all of which are major tourism areas, saying it they were very likely to cause similar violent clashes.

On Saturday, Hong Kong is expected to see a large number of people coming out to say no to violence and pull the city back from the brink of a dangerous situation that many have warned of. The rally, one of the many moves taken by Hong Kong residents, will be held at 5 pm on Saturday in Tamar Park, Hong Kong Island.

Just one day after an online signature petition was voluntarily initiated by a group of Hong Kong residents on Thursday, about 100,000 people have signed up to demand the city return to peace and order.

With the new school year drawing closer, Secretary for Education Kevin Yeung Yunhung on Friday also voiced his objection to a call by radicals to boycott classes.

In his social media page, Yeung said school is an apolitical place where students should be free from political interference.

Due to the tense social environment over the past few months, Yeung and his colleagues set out to meet with stakeholders from the education sector to prepare students and teachers to ease into the new school year.

Augustus Tang has been appointed as Hogg's replacement, while Ronald Lam replaces Loo.

The reshuffle of the senior executives came after the country's top civil aviation regulator issued a security risk warning to Cathay Pacific and banned its staff involved in radical protests from flying in mainland airspace.

Noting that recent events have called into question Cathay Pacific's commitment to flight safety and security and put the airline's reputation and brand under pressure, Chairman John Slosar said: "We therefore think it is time to put a new management team in place who can reset confidence and lead the airline to new heights. Cathay Pacific is fully committed to Hong Kong under the principle of 'one country, two systems' as enshrined in the Basic Law."