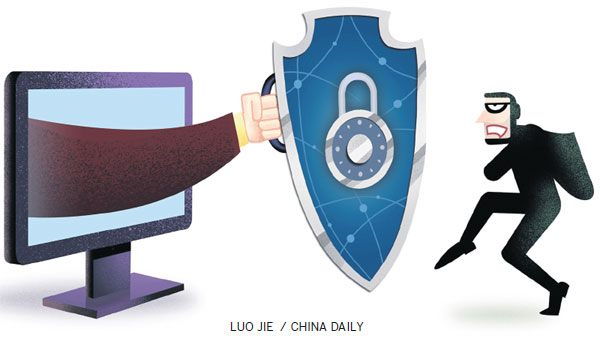 Officials and experts attending the Seventh Internet Security Conference 2019, held in Beijing Monday, called for a joint public-private effort to defend against cyberattacks and maintain a reliable and safe cyberspace.

Groups that threaten national security no longer depend on military weapons. Instead, they prefer cheap but destructive cyberattacks to target governments and key infrastructure, putting a lot of people in jeopardy, they said.

"With the blossoming development of cloud computing, big data, artificial intelligence and other new technologies, cyberattacks and cybercrimes continue to rise amid the fierce competition in cyberspace," said Li Aidong, deputy director-general at the cybersecurity coordination bureau of the Cyberspace Administration of China.

"It is urgent for all parties to work together to maintain cybersecurity," he said.

More efforts would be needed to beef up construction of an information infrastructure protection system, focusing on preventing organised cyberattacks between countries, and gradually establish systems like a chief security officer and network review, the official added.

China currently has the biggest share of the global internet market in terms of the number of users. A report by the China Internet Network Information Center said the country has 829 million internet users, accounting for 59.6 per cent of its population.

It is necessary for China to beef up input on cybersecurity, said Yang Yuyan, deputy director-general at the cybersecurity administration bureau of the Ministry of Industry and Information Technology.

"In today's changing environment, the online threats are real and multifaceted. Cyberattacks and risks have become increasingly rampant, and they actually break the boundaries between the physical world and the virtual network," Yang said.

He explained: "With online threats on the horizon, the key defense lies in a coordinated response from the government, companies, institutes and the rest of society, which will help foster breakthroughs in key technologies and build a good ecosystem in the sector."

Wu Hequan, an academician of the Chinese Academy of Engineering, said new security problems will appear in the era of 5G communications technology and the internet of everything.

"For example, almost 10 times faster than 4G, 5G supports more types of services and a wider range of applications. However, 5G may be a double-edged sword for security. On the one hand, intelligent monitoring will be achieved in the 5G era which will help improve the network security defense level. On the other hand, 5G may also bring new online risks, making it possible to more cyberattacks," Wu said.

A report from the Internet Society's Online Trust Alliance said the worldwide economic impact of cybercrime was at least $45 billion, highlighting the increasingly important role of cybersecurity.

"Cybersecurity is no longer only related to the internet but now involves national security, social security, infrastructure security and even personal safety," said Zhou Hongyi, chairman and CEO of the 360 Security Technology Inc.

"In the future, there will be hundreds of billions of smart devices in various fields, and we will face unprecedented security challenges," he said.

Zhou fears that cyberattacks and cybercrimes will increase in the future. To combat the threat, a growing army of professionals will have to be recruited.