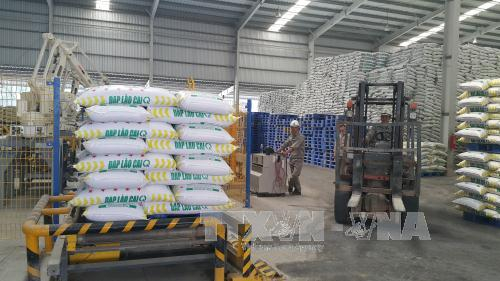 Many fertiliser companies in Vietnam are steadily increasing the production of organic products in anticipation of a surge in demand over the coming years.

The use of organic fertilisers is on the rise as farmers see improvements in the soil, crops and environment when they dispense with chemicals, they said.

Phan Van Tam, marketing director of Bình Dien Fertiliser Joint Stock Company, told Nguoi Lao Dong (The Labourer) newspaper that his company has been supplying organic fertilisers to the market for three or four years, adding that it now produces nearly 20,000 tonnes a year and would increase production.

They are produced only at only two subsidiaries of the company, Binh Dien - Mekong and Binh Dien - Lam Dong, so the output is still modest, he said.

Another subsidiary, Binh Dien Quang Trị JSC, has been granted a licence and would start production soon, he said.

In the near future, the parent company and Binh Dien Ninh Binh Company would also start production, and the output would increase significantly, he said.

Loc Troi, which entered the organic fertiliser market in 2009 with only one product, has now expended to eight, and is supplies two million litres and 10,000 tonnes of organic fertilisers to the market annually.

Loc Troi and the department recently signed a deal to enhance production and usage of the fertilisers.

Many companies have shifted to organic products to meet the demand for safe agricultural produce.

According to the Ministry of Agriculture and Rural Development, as of December 2017 the country had only 713 organic fertiliser products, accounting for 5 per cent of total fertiliser output. In April 2019 they had increased to 2,312 and 11.1 per cent.

Meanwhile, imports have been skyrocketing in recent years from Japan, the EU, China, Myanmar, Cambodia, and Laos.

An official of the ministry said Vietnam has great potential in organic fertiliser production with 60-70 million tonnes of agricultural by-products and 20 million of seafood by-products made in the country annually.

The by-products can be used as raw materials for making organic fertilisers, but they have not been properly exploited for a long time, he said.

This would also help reduce pollution and improve soil fertility and farm produce quality, he added.