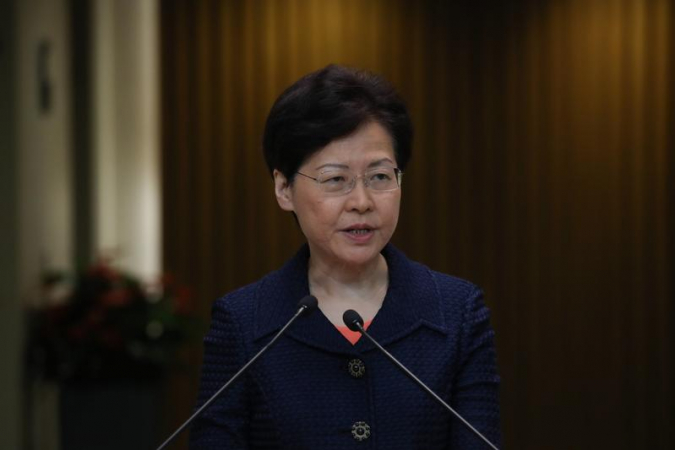 HONG KONG — Carrie Lam Cheng Yuet-ngor, chief executive of the Hong Kong Special Administrative Region, said on Tuesday that her government would immediately set up a platform for dialogue with people from all walks of life.

“All my principal officials and I are committed to listening to what the people have to tell us,” she said. She hoped dialogue would facilitate mutual understanding and respect in a now-divided society and would help the city recover from its protracted chaos.

Starting this week, Lam said, talks would begin with organizations and people who gave practical advice to the government in the past three months.

Speaking to reporters before Tuesday’s regular Executive Council meeting, Lam said she hoped the nonviolent weekend assembly, in which tens of thousands took part, indicated that peace was returning to the city.

Sunday’s protest was the calm­est since demonstrations against a now-shelved extradition amendment bill escalated in mid-June.

Lam said she remained convinced that Hong Kong has unique advantages in attracting overseas companies, and the government had been doing its best to ensure that the rule of law was being upheld and respected.

Earlier, the government commissioned the Independent Police Complaints Council to look into the cause and facts pertaining to the violent protests from June 9 to July 2 and to submit a report within six months.

Lam said the scope of the review would be extended to all mass protests, which began on June 9, as it was unclear when the turmoil was going to end.

As part of an exhaustive review, the independent council has set up a special task force for, among other things, fact finding, assessment of police procedures and making recommendations to prevent any reoccurrence. The report will be made public when ready.

To ensure objectivity, the independent council will also hire experienced foreign experts, including those who dealt with the unrest in United Kingdom in 2011, Lam said.

It will also look into complaints against police, including those pertaining to an incident in Yuen Long on July 21, when white-clad mobs indiscriminately attacked protesters, passengers and journalists in the subway station, Lam said.

Also on Tuesday, the Office of the Commissioner of the Ministry of Foreign Affairs in the Hong Kong Special Administrative Region warned against wishful thinking that China would trade on its own territorial sovereignty and national unity.

The statement came after United States Vice-President Mike Pence said on Monday it would be harder for Washington to make a trade deal with Beijing if there was violence in the city.

China firmly opposes any country’s attempt to use Hong Kong’s prosperity and stability — as well as the well-being of over 7 million Hong Kong residents — as a bargaining chip, the office’s spokesman said.

It said some US politicians have stuck to a Cold War mentality and its attendant hegemonic and zero-sum thinking. They are confusing right and wrong, making irresponsible remarks and grossly interfering in China’s internal affairs.

Hong Kong affairs are purely China’s domestic affairs, in which no country, organization or individual is allowed to interfere, Geng said. “Canada has no right to make presumptuous comments about Hong Kong affairs,” he said, adding that any attempt to create chaos in Hong Kong will fail.