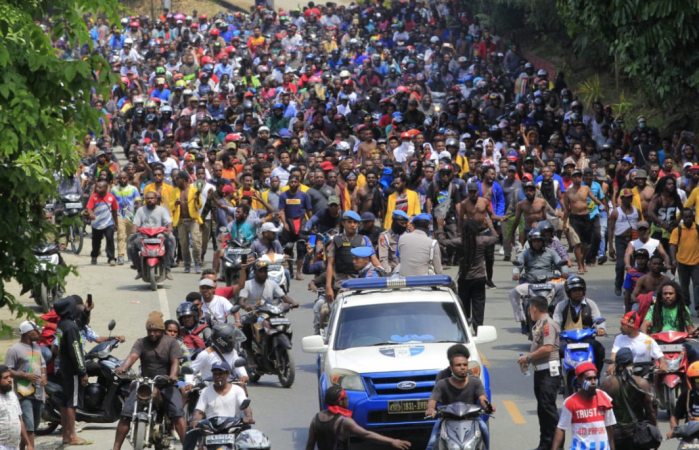 Thousands rally in Jayapura, Papua, on Monday to express their anger over racial abuse. (Antara/Gusti Tanati)

The United Liberation Movement for West Papua (ULMWP) has called once again for the United Nations to visit Papua and West Papua following the racial abuse that sparked widespread protests in the country's easternmost regions.

Previously, Pacific countries of the Pacific Islands Forum (PIF) had “strongly encouraged” Indonesia to finalize the timing of a visit by the United Nations high commissioner for human rights to investigate alleged human rights abuses and allow the commissioner to create an “evidence-based, informed report” on the situation in Papua.

ULMWP chairman Benny Wenda said that the “extreme racism” experienced by Papuan students studying in regions outside Papua showed the urgency of a UN visit.

“In February this year, the UN condemned the ‘deeply entrenched discrimination and racism’ Papuans suffer at the hands of Indonesia. The UN must now follow this up,” Benny said in a statement on Tuesday.

“The UN high commissioner for human rights Michelle Bachelet must be allowed to visit West Papua. I reiterate the call of the Pacific Islands for Indonesia to stop blocking the high commissioner from seeing the reality in our country.”

Since February last year, Indonesia had “in principle” agreed to grant access to Papua to the high commissioner's office, but the two sides still needed further talks on the arrangements.

In June last year, Indonesia reprimanded staff members of the UN agency’s regional office in Bangkok for “unilaterally setting the dates and areas to visit in Papua and West Papua, while demanding immediate access.”

Benny ended the statement by saying that the people of West Papua should be “given the choice to determine their own destiny." (kmt)