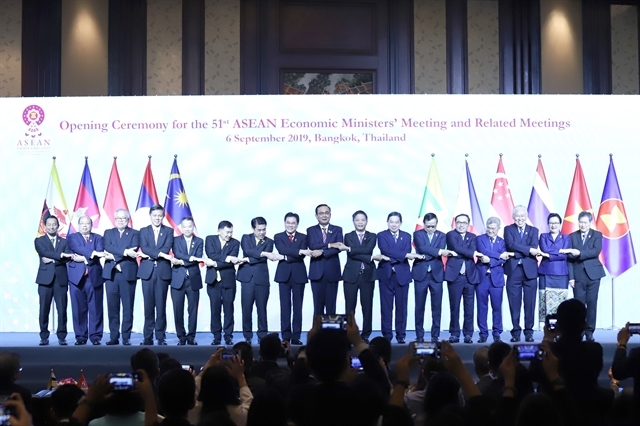 The 51st Asean Economic Ministers’ Meeting (AEM 51) and related meetings officially started in Bangkok on September 6, bringing together economic leaders from the 10 member countries of the Association of Southeast Asian Nations (Asean) and partner countries.

Vietnam's Minister of Industry and Trade Tran Tuan Anh led a  delegation to the event, scheduled to last until September 10.

In his opening remarks, Thai Prime Minister Prayut Chan-o-cha recalled the dream of Asean founding members 52 years ago of turning the grouping into an area of political stability and socio-economic development.

If no joint efforts were made in building the Asean Community, there would not have been such a strong bloc, Prayut stressed.

Thailand’s Deputy Prime Minister and Minister of Commerce Jurin Laksanawisit, who is also AEM 51 chair, said as Asean’s rotary chair in 2019, Thailand had carried out the grouping’s economic development plan in accordance with the set roadmap.

The AEM 51 will discuss the bloc’s priorities in economic and trade cooperation this year, proposed by Thailand and review the realisation of commitments under Asean agreements.

Delegates will focus on issues such as competitiveness policies, consumer protection, intellectual property, e-commerce and support for micro, small- and medium-sized enterprises (MSMEs), among others.

They will also review the implementation of free trade agreements (FTA) between nations in the 10-member group and its partners including India, China, the Republic of Korea, Japan, Australia and New Zealand, as well as orientations to upgrade these existing FTAs in the future.

The ministers will look into cooperation between Asean and other partners such as Canada, Russia and the US, and set forth orientations to step up the partnerships.

Within the framework of the AEM 51, there will be related meetings, including the 33rd Asean Free Trade Area Council Meeting, the 22nd Asean Economic Ministers - Asean Investment Area (AEM-AIA) Council Meeting, and consultations between Asean and its partner countries.

The seventh Regional Comprehensive Economic Partnership (RCEP) Ministerial Meeting will be held, aiming at concluding the RCEP agreement by the end of this year,  as set at the second RCEP Summit in Singapore last November.

Minister Anh told the Vietnam News Agency on the sidelines of the AEM 51 that Vietnam was to sign the Asean Trade in Services Agreement (ATISA) to promote trade and service liberalisation in the grouping.

The Asean has become one of Vietnam's major economic and trade partners, with trade revenue increasing from US$5.9 billion in 1996 when Vietnam first joined the Asean Free Trade Area to nearly $56.3 billion last year.

The integration into the Asean economy has brought about positive impacts for Vietnam's exports, helped local businesses improve their competitiveness and created changes in building and perfecting policies, eased laws and procedures regarding investment towards an open and transparent business environment which has attracted rising foreign investments.

Anh said Vietnam was stepping up preparations for its Asean Chairmanship in 2020, adding that his ministry had coordinated with relevant ministries and agencies to devise approaches, topics and priorities of the economic pillar for the year.