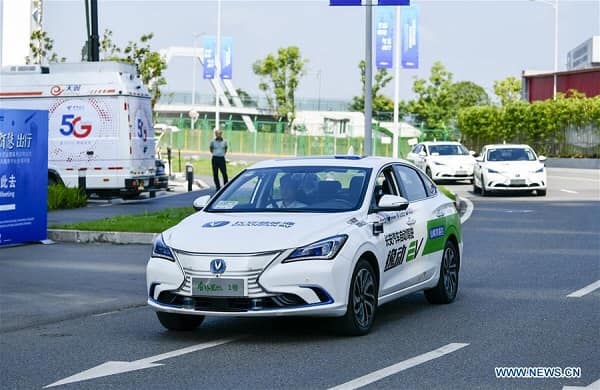 A Level 4 self-driving Changan automobile does a driving drill on July 26 in a pilot zone for 5G-based autonomous driving in Southwest China's Chongqing municipality. [Photo /Xinhua]

China’s auto market has not fired back up to the table in the first half of the year, according to an analysis on September 6.

A total of 12.37 million cars were sold in China’s domestic market in the first half of the year, dropping by 11.8 per cent from a year earlier, according to statistics from the China Association of Automobile Manufacturers.

The decline was reflected in financial reports of 17 domestic listed automakers. Only two of the 17 passenger carmakers posted increases in net profit in the first half. Five were still making losses while 13 saw net profits shrink -- by more than 100 per cent for three of them.

Among the 17 carmakers, Changan Automobile suffered most with losses of 2.24 billion yuan (Bt9.5 billion), partly attributed to the falling sales of Changan Ford. SAIC Motor Corp topped the list of profit-makers, making 367.92 billion yuan, but its profits were still down by 27.49 per cent year on year -- the first contraction in 10 years since SAIC was listed on the stock exchange.

Amid the gloomy trend, BYD and BJEV handed in decent results, posting 203.6 per cent and 9.7 per cent increases in net profits respectively.

But subsidies for new-energy carmakers accounted for 48.8 per cent of BYD’s net profit as well as even over 100 per cent of that of BJEV, if including all nonrecurring profits and losses such as subsidies.