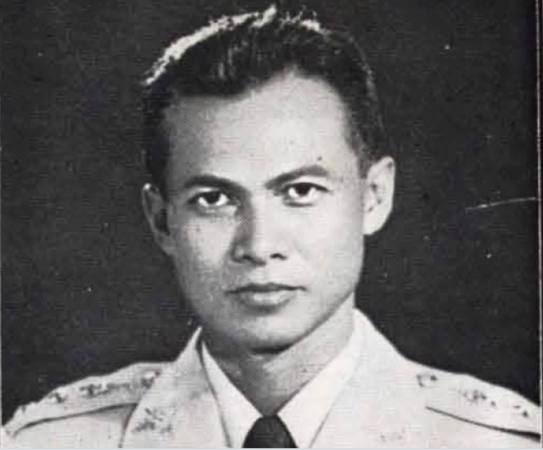 The statesman as a young man: prem in 1959. - Photos courtesy of Team Ceritalah

IT is one of the most iconic images in Southeast Asian history: Thailand’s King Bhumibol (Rama IX) sitting regally before a group of prostrating, feuding politicians. The date: May 20th, 1992.

The King had just intervened, demanding an end to bloody riots that had paralysed Bangkok. We all know how it ended. The protestors dispersed. The junta leader resigned; and Thailand gradually returned to civilian rule.

Also kneeling at the King’s side was another remarkable man, his trusted advisor Prem Tinsulanonda – who passed away earlier this year at the age of 98, exceeding his monarch (who died in 2016 at the age of 88) in terms of longevity.

While King Bhumibol has clearly been the defining figure in post-war Thai history, the men behind him, such as Prem, have also been immensely important in themselves.

Indeed, Southeast Asia has witnessed several intriguing and all-powerful political pairings: from Singapore’s Lee Kuan Yew and Goh Keng Swee (the man behind the island republic’s economic success story) to Dr Mahathir Mohamad and Daim Zainuddin. Indonesia’s Suharto by comparison (having risen to power in a coup) never really trusted any of his lieutenants sufficiently to allow them the same degree of authority.

Prem was born in the southern province of Songkhla in 1920. Coming from a relatively humble background (his father was a prison warden) he joined the army, rising to prominence only in his fifties as the Cold War raged across Indochina.

As fate would have it, in the mid-70s, Prem was commanding the Second Army in the restive north-eastern region of Isaan where the Communist Party of Thailand (CPT) was particularly active.

While he wasn’t the mastermind of these initiatives, his success in Isaan was to mark a turning-point in the struggle against the communists and a grateful monarch was to show his appreciation by bringing the steely general into his inner circle. Indeed, both men were soft-spoken, distrustful of politicians and intensely devoted to Thai tradition.

Prem eventually become the head of the Thai army in 1978, assuming the premiership in 1980. Although he was never tested electorally, Prem (with the backing of the palace) governed from 1980-1988.

Whilst he was neither a visionary nor a man of ideas, his steadfastness (he withstood two coup attempts) ensured a period of political calm that enabled the economy to boom – with the Thai GDP almost doubling in size from US$32.35bil in 1980 to US$61.67bil in 1988.

Prem believed in empowering technocrats (such as Snoh Unakul, his economic czar) and they in turn ensured the successful transition from a predominantly agrarian polity into a manufacturing and export-oriented powerhouse.

As the historian Chris Baker noted: “King Bhumibol found Prem to be an ideal right-hand man. Prem wasn’t so much a creative force in the construction of the “Bhumibol Era”; however, he was more an operational figure, and, in this respect, he was very important.”

Despite having to cede power to an elected politician in 1988, Prem remained influential. He was appointed to the Privy Council and eventually became its President in 1998, holding the position until his death in 2019.

His presence pervaded all the crucial events of Bhumibol’s latter reign, seemingly always (and sometimes literally) just off-centre, as with the 1992 royal intervention.

Indeed, he was perceived to be the prime mover of Thaksin Shinawatra’s ouster in 2006. Ironically, when the latter’s sister, Yingluck, won power in 2011, she would eventually call on the aging establishment figure to pay her respects – like scores of other ambitious politicians or military officers.

However, rather than “save” Thailand, the 2006 and 2014 coups that removed the Shinawatras plunged the kingdom into a period of intense polarisation that continues to this day.

As Dr Punchada Sirivunnabood, a political analyst with Mahidol University notes: “Prem’s legacy is mixed. How Thais see him varies by who you speak to. The older generations remember him as a stabilising force in an uncertain era, whereas younger Thais see him – fairly or unfairly – as embodying the elite repression of democracy.”

Prem, (much like Daim with Dr Mahathir) derived much of his legitimacy from Bhumibol. It’s what allowed him to fend off political challenges so to be able to focus on the challenges of nation-building and the consolidation as well as the promotion of the Chakri dynasty.

But while Bhumibol’s prestige only grew, its arguable that Prem – and the Thai establishment – failed to adjust to new social realities. Certainly, Prem’s insistence on a state rooted in the traditional principles of “nation, religion, king” no longer holds sway with younger Thais seeking new ways to define their country and their identity.

He was both a fervent royalist and a builder: helping to steer the palace and Thai state through the political squalls of the Cold War.

With a new monarch on the Chakri throne – King Vajiralongkorn – it will be interesting to see who (if anyone) emerges to provide the wise counsel and steadying force for the untested head of state, especially with a major economic downturn expected within the next year or so.

The Thailand of today is undoubtedly King Bhumibol and Prem’s creation. But whether it will continue to be so remains to be seen.