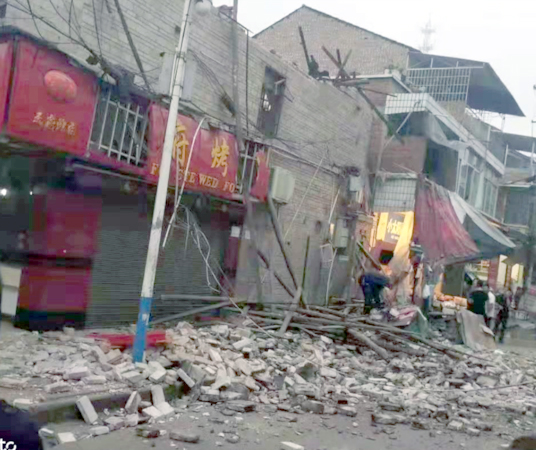 One person was killed and 29 others were injured as of 10:00 am after a 5.4-magnitude earthquake jolted Weiyuan county of Neijiang city in southwest China's Sichuan province at 6:42 am Sunday, local government said.

The injured have been hospitalized, and two of them are in serious conditions, according to the emergency management bureau of Neijiang.

At least 17 houses collapsed and another 215 were damaged in the quake, bureau said.

The epicenter, with a depth of 10 km, was monitored at 29.55 degrees north latitude and 104.79 degrees east longitude, according to the China Earthquake Networks Center (CENC).

The rescue work is underway.

A video which went viral shows the top of an old house made of bricks and tiles in Quan’an town in downtown Neijiang collapsed and bricks were scattered on the ground. Liu Yan, deputy chief of the town government, confirmed the video.

"I was awake lying on bed when I felt the bed shaking for about one or two seconds," said Zhang Yi, a 71-year-old resident of Chengdu.

Trains leaving Chengdu for Chongqing municipality, Guangdong, Shaanxi, Yunnan，Zhejiang and Liaoning provinces and some parts of Sichuan were either delayed or canceled, according to China Railway Chengdu Group Co., Ltd.

Two seconds after the earthquake, some residents of Neijiang received the early warning that seismic waves from Weiyuan were impending through smartphones, television sets, and special receiving terminals.

"Thirty-six second after the earthquake, residents of Chengdu received the early warning," said Wu Liangyan, an information officer with the Institute of Care-Life in Chengdu.

A real-time system providing warnings seconds after a quake can save lives because the warnings are transmitted via radio waves traveling faster than seismic waves.